A General Tso Chicken recipe that’s baked, not fried and so much better than the real thing! Crispy and tender chicken pieces baked in crushed cornflakes and dressed in a classic sweet and sour sauce. It’s absolutely scrumptious! 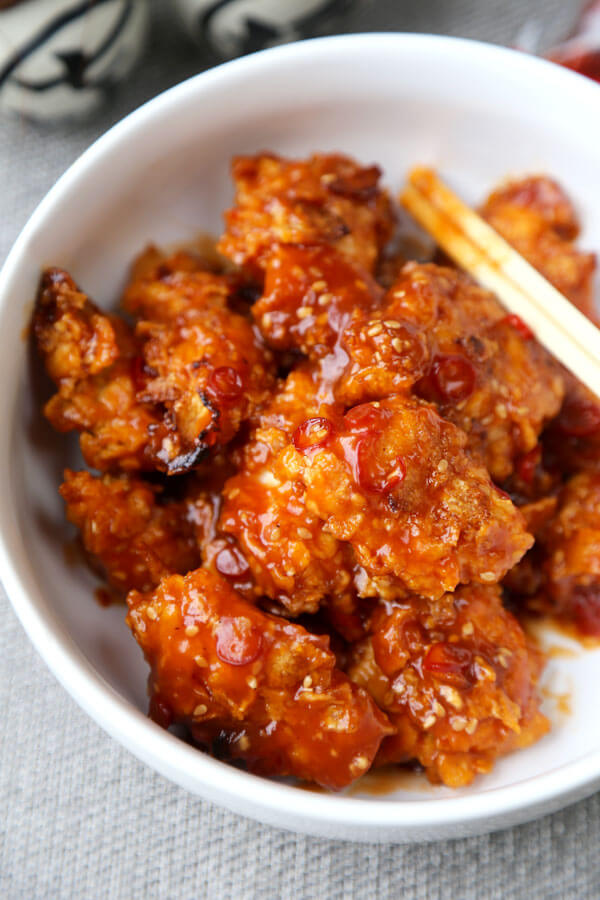 A few nights ago I came across a very interesting documentary on Netflix called The search for general Tso.

The movie explores the origins of general Tso’s chicken and why it’s becomes such an iconic dish in America. The dish was apparently created in 1952 by Chef Peng Chang-kuei (彭長貴) at Pen’s Garden Hunan restaurant in Taipei, Taiwan. He named the dish General Tso chicken in honor of the famous Qing Dynasty general from his home province of Hunan.

The documentary also talks about the evolution of Chinese food in America and the difficulties Chinese immigrants had to face in order to survive and eventually thrive in this country.

What is General Tso Chicken?

General Tso chicken is one of the most popular takeout dishes you can get in Chinese American restaurants across the United States and Canada.

The dish is made of chicken pieces that have been dipped in egg and cornstarch and deep fried until crispy. The fried chicken is then tossed in a sweet and tangy gooey sauce and sometimes topped with sesame seeds.

Once I finished watching the documentary I wasn’t only craving a big plate of general Tso’s chicken, I wondered if I could make a healthier version of it in my own kitchen. I would have to find a way to skip the deep fryer and create a breading that would be just as crispy as the original version.

The sauce would also have less sugar but still taste exactly like General Tso sauce.

“I can do it”, I told myself as I put on an apron and began prepping the dish. 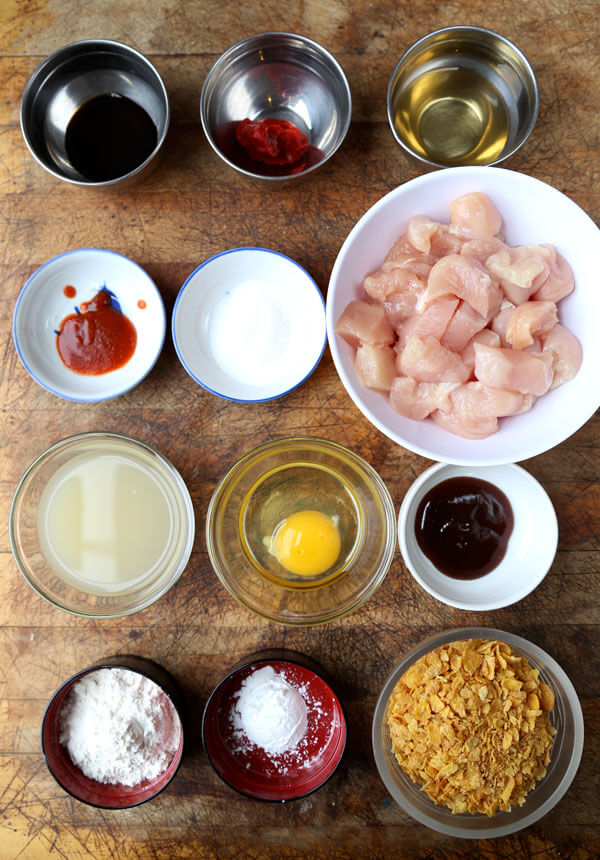 One thing I can tell you is that there is no shortage of general Tso’s chicken recipes online! I had to read through a dozen of them before I felt knowledgeable enough to make my first batch.

I picked three of my favorite adaptations and began experimenting with the measurement of each ingredient. My general Tso chicken sauce would be sweet but not cloyingly sweet, and with a tangy element to it.

And since general Tso’s chicken hails from Taipei, it only seemed right to create something with a little heat (Hunan province is known for its hot and spicy flavors). And while I still kept the dish somewhat sweet, I focused more on its savory and tangy side. 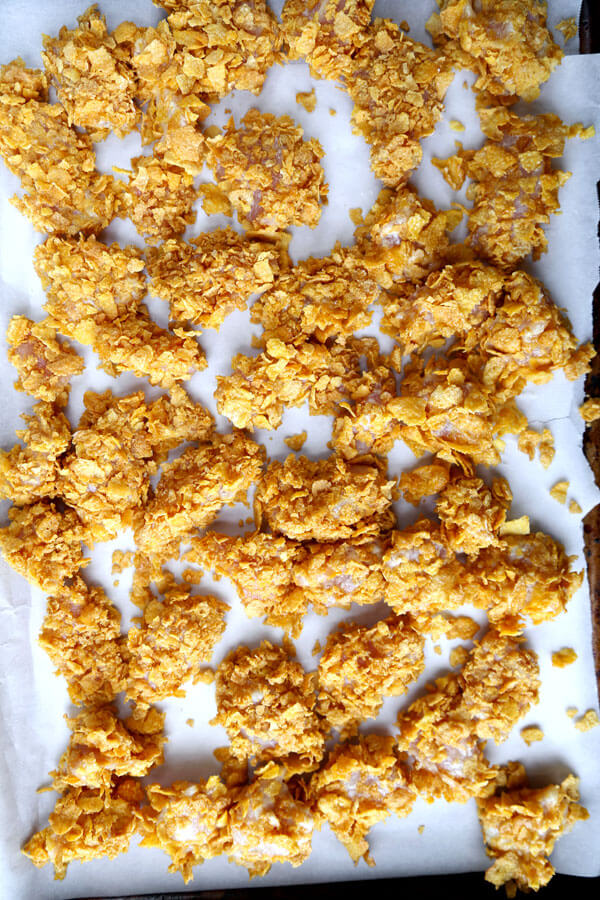 The biggest issue with making fried foods healthy is a textural one.

What makes fried chicken so delicious is the light and crispy skin you get from deep frying it. Achieving the same kind of crispiness without the fryer has been a challenge but there’s one ingredient I found that works like a charm – cornflakes!

The result is pretty amazing – a crispy exterior and juicy interior just like you would get if the chicken pieces were deep fried! I had to remind myself after every bite that this general Tso chicken was baked, not fried!

Sadly, this recipe isn’t gluten-free because cornflakes contain sweeteners that have gluten in them. And I’m also using regular soy sauce which also contains gluten.

But there’s no need for a sad face since you can easily make it gluten-free! You just need to swap Kellogg’s cornflakes for a gluten-free brand such as Nature’s Path, EnviroKidz Amazon Flakes, or Erewhon Corn Flakes, and use gluten-free soy sauce like Kikkoman’s or San J’s.

Traditional deep fried General Tso chicken is also not gluten-free unless it says it on the menu. 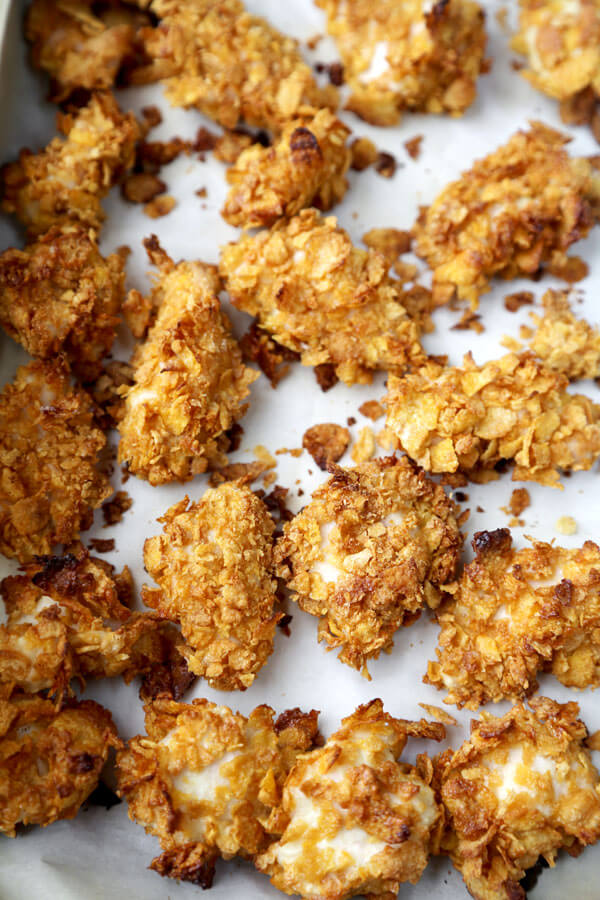 If you are looking for a less sweet and healthier general Tso chicken recipe, I urge you to try this version.

This is what I call delicious healthier Chinese food. I could eat this every day!

What to serve this with? 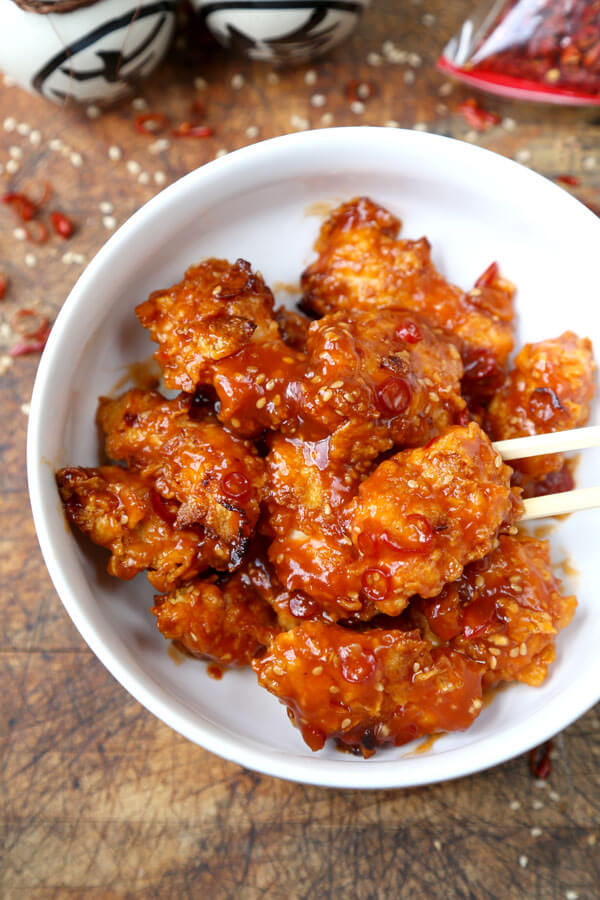 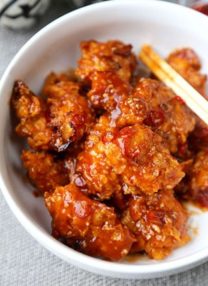 This is a healthy baked general Tso chicken recipe – Baked chicken pieces tossed in a tangy and sweet sauce. Delish!

You can also use panko breadcrumbs. I have never tried it myself but others have said it’s just as delicious! 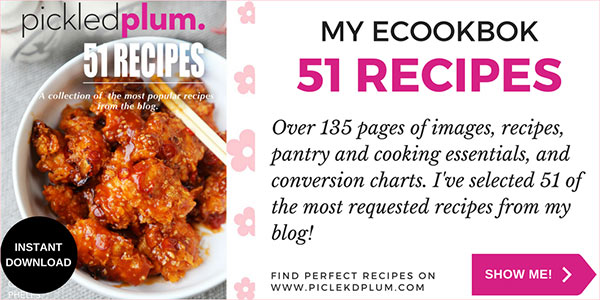