Making dumplings is so much fun that you will want your whole family to get involved! These fresh, earthy and savory dumplings are filled with mushrooms and cabbage, making them vegetarian and delightful on the palate!

Making dumplings can look intimidating at first: it’s a dish that hails from China, a country renowned for its good food and complex cuisine, and it involves folding a wrapper made of dough in such a way that it looks like a perfect little pillow.

I certainly doesn’t look like the easiest thing to make!

I felt the same way the first time I made dumplings. I expected them to look like poop, like the ones that don’t make the cut in a dumpling factory or dim sum restaurant and end up in the trash bin.

But as soon as I started folding I realized it wasn’t that hard to make. My first dumpling looked surprisingly good and I got better at it as I kept on folding. Since then I have been making them on a regular basis and truly enjoy the process. There’s something very calming about repeating the same action over and over again, it puts me in an almost meditative state.

Plus, I love looking at the final result – a plate full of yummy dumplings that my family devours with excitement each and every time.

Today I’m going to show you how to make Chinese dumplings step by step with the option of steaming them, pan frying them, or boiling them. Let’s cook!

Taken from the adjective dump which means ‘of the consistency of dough’, dumpling is a term used for any type of food consisting of a piece of dough that’s wrapped around a filling or that contains no filling. There are many different varieties of dumplings available from several countries around the world but the most well known are the Chinese dumplings, which isn’t surprising since they are so delicious!

Here are a few variations you can play with for the filling (or you can come up with your own too, obviously 😀):

How to Make Dumplings

How to Steam Dumplings

How to Pan Fry Dumplings

How to Boil Dumplings

What to Serve with Dumplings 🥟

Are the dumplings the star of your meal or are they more of a side dish?

If they are the star of your meal, serve them with other small dishes such as:

If they are a side to an Asian style dinner, serve them with:

These fresh, earthy and savory dumplings are filled with mushrooms and cabbage, making them vegetarian and delightful on the palate!

Freshly cooked dumplings will keep in the fridge, in an airtight storage container, for up to 3-4 days. 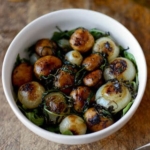