This Korean Sticky Chicken Recipe is absolutely loaded with savory-sweet-heat! Honey and Gochugaru create a peppery glaze that is out of this world. This may end up being your new favorite Korean chicken recipe. Ready in 20 minutes from start to finish! 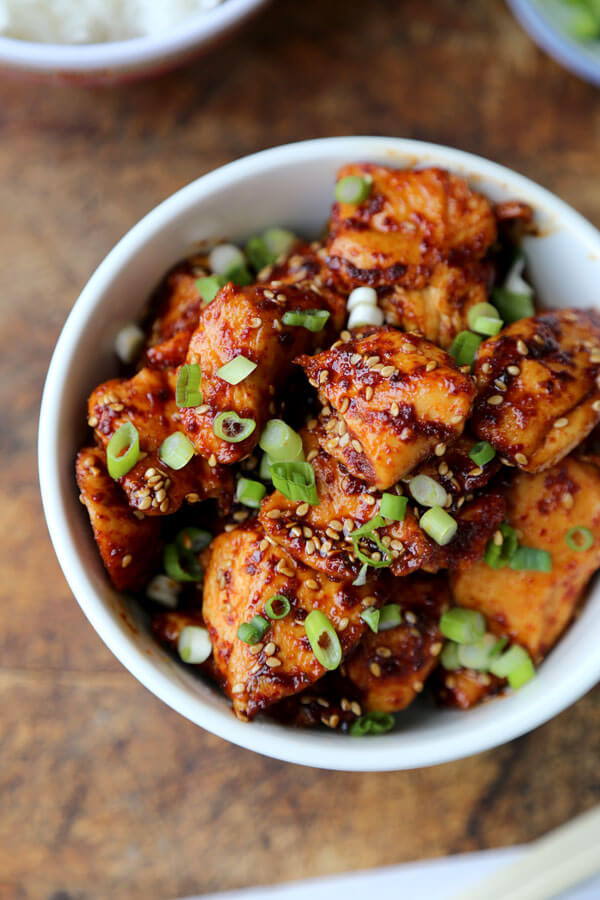 Sometimes cooking can be such a breeze.

You know, like on those occasions when everything just comes together from an ingredients, flavor and timing perspective.

You put a 20 minute podcast on your phone, pour a glass of wine and everything just sorta flows. Before you know it, dinner is on the table – and smiling faces are devouring the fruits of your easy labor.

Other times, unfortunately, getting dinner on the table can be more of a hard fought slog.

I’m sure you’ll agree with me that there’s nothing more disheartening after a long day at work than to attempt a so-called “easy” recipe you found online – only to find that there are a bunch of time consuming prep steps to accomplish.

And that’s before you ever even get to the cooking part.

Luckily, it turns out that today’s recipe totally belongs in the ‘easy’ column!

I have one of the easiest and flavor packed Korean chicken recipes of all time.

Yep, this Korean sticky chicken recipe is simple to make, but tastes anything but.

Loaded with savory and sweet heat – and ready in about 20 minutes from start to finish – this may just end up making steady appearances in your weeknight dinner rotation! 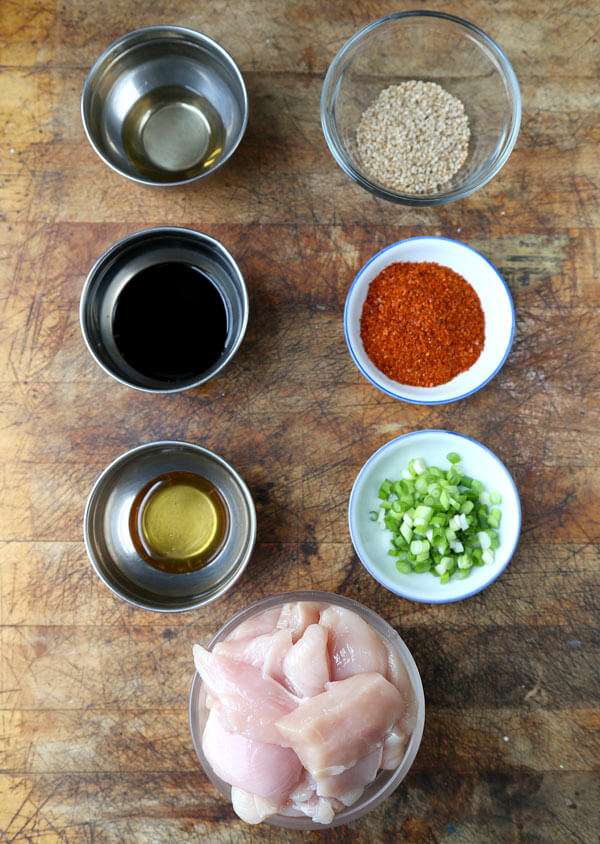 Seriously, when it comes to easy chicken recipes, this is the pinnacle.

Not only is dinner ready in under 15 minutes, the outsized, deep flavors you get on the plate make it seem like you must have been working in the kitchen for a loooong time.

Also, there’s no marinating necessary to get the bold flavors infused into the chicken!

Aside from the aggressive Korean spices used to build the towering, savory-sweet-heat, there’s a secret method to infusing a TON of flavor into the meat in this simple chicken breast recipe.

More on that later 🙂

But I’ll never forget the look on Ben’s face the first time he took a bite of this Korean sticky chicken.

I don’t want to toot my own horn, but that look said that he was definitely impressed with what he was tasting.

After he swallowed that first bite, he said, “Well, that’s magic.”

He also assumed it had taken me hours in the kitchen. When I finished telling him the short list of steps, he waited a few beats as if there would be more.

Then, he went on to tell me that – before we met, when he would cook for himself – he used to make super simple meals for himself. “But it was basically just stuff that would keep you alive. I never had the confidence to attempt much in the flavor department,” he said.

Furthermore, he said he wished he had known about this Korean chicken recipe back in the day when he was doing his… uh, survival cooking.

I took that as high praise indeed! 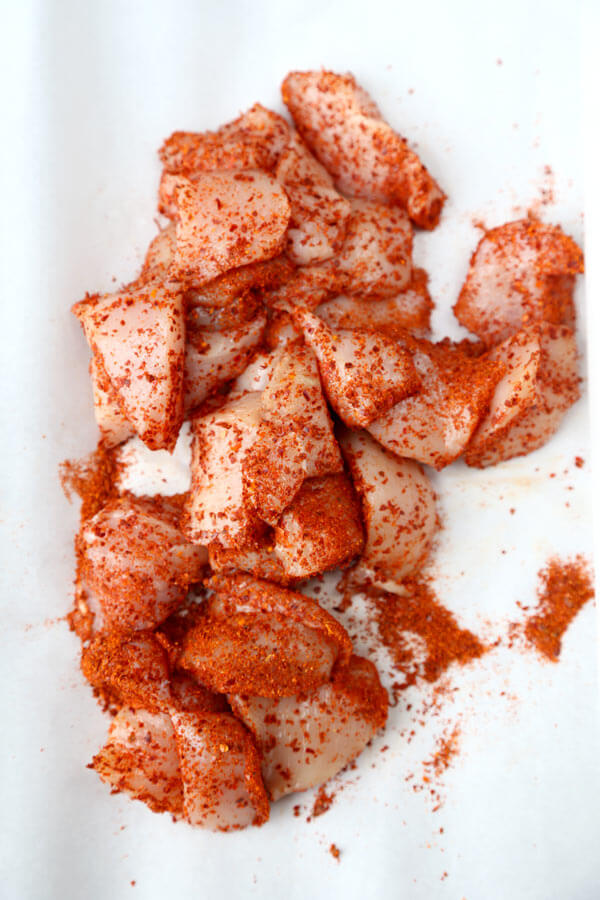 Usually running the gamut from savory to spicy to sweet, this magical bird tends to be mega crispy because of the double fry.

You see, frying twice can send the crispiness of the skin and flaky breading to sky high levels of perfection.

However, as with my oven baked Korean chicken wings, I try to keep the deep frying to a bare minimum in my home kitchen for two basic reasons.

Therefore, making this Korean sticky chicken recipe was an attempt at capturing the essence of Korean fried chicken’s flavor – while keeping it super easy to prepare and way healthier.

Best part: the flavor is so assertive that it doesn’t feel like a healthier alternative at all! 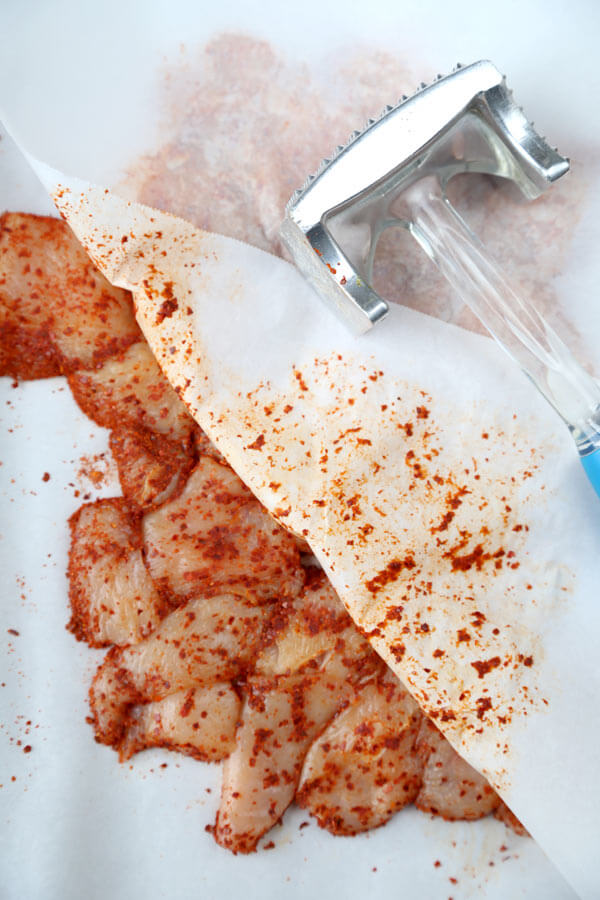 Give it a bash!

A little earlier, I mentioned that there was a secret method to infusing a ton of flavor into this chicken breast recipe in a super short amount of time.

…I’m gonna tell you about it now!

Instead of a long soak in a marinade to achieve deep flavor, give it a bash!

Seriously! Just lay your boneless chicken pieces on a piece of parchment paper on a solid surface.

Then sprinkle your gochugaru (Korean red chili flakes) on top of the meat.

Cover with another piece of parchment paper and pound a few times with a rolling pin or meat tenderizer.

Your kitchen will sound like a vintage episode of Batman for a few seconds: POW! BAM! BOOM!

However, your chicken will not only be tenderized, it’ll have the spices locked inside. Embedded if you will!

Added bonus: when you add your sticky bubbling honey and soy sauce glaze, the chicken breast will be porous enough to really soak in the flavors.

I saw this simple concept at work while watching a Jamie Oliver cooking video a while back. It looked so easy – and I totally related to his efforts to portray home cooking as easy and super fun.

Therefore, I wanted to incorporate this fun technique into one of my own recipes to share with you, friends.

Aside from successfully locking the flavors in, any dinner prep where you get a bit of a cathartic exercise buzz isn’t a bad thing by any means!

Just a word of advice: don’t go overboard with the pounding. The goal is spice-embedded and tenderized chicken breast – not ground chicken, ha! 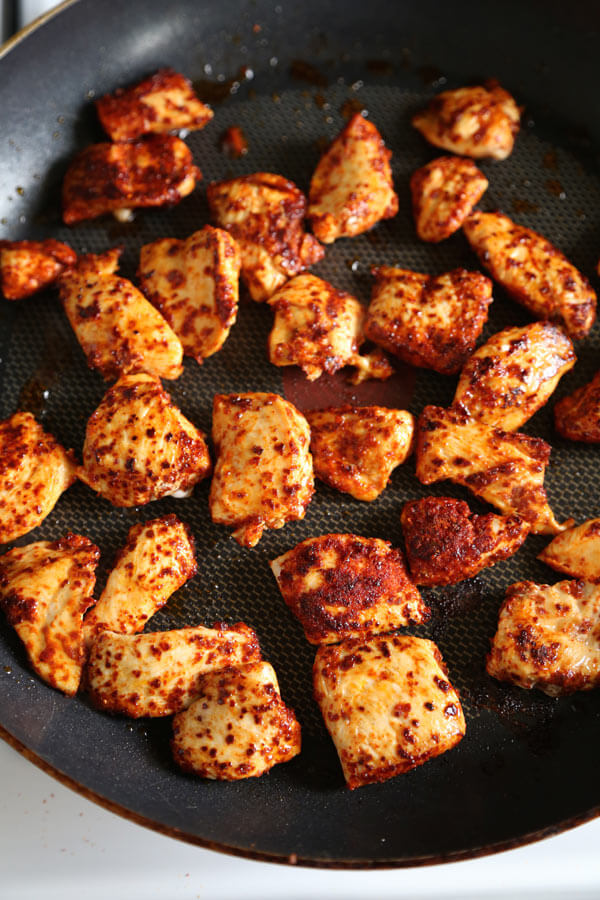 How is This Different From Korean Chicken Bulgogi?

Another somewhat similar Korean chicken recipe that plays with the sweet and savory flavor profile is dak bulgogi.

While bulgogi is actually a marinated beef dish, dak bulgogi is a variation with sliced chicken. Chicken bulgogi, fresh off the grill, is a true culinary delight! A thing to behold.

However, the main difference between chicken bulgogi and this Korean sticky chicken recipe from a cooking perspective is that bulgogi is always going to require a long marinade to infuse flavor into the meat.

We’re skipping that step and speeding up the process by wielding our sturdy rolling pins though, right!?

Also, chicken bulgogi is traditionally grilled and then eaten in lettuce wraps, dipped in ssamjang.

This Korean sticky chicken recipe is pan sauteed and then eaten over rice with sesame seeds and fresh scallions.

There is also a decent amount of heat imparted by use of the gochugaru in this korean spicy chicken recipe. 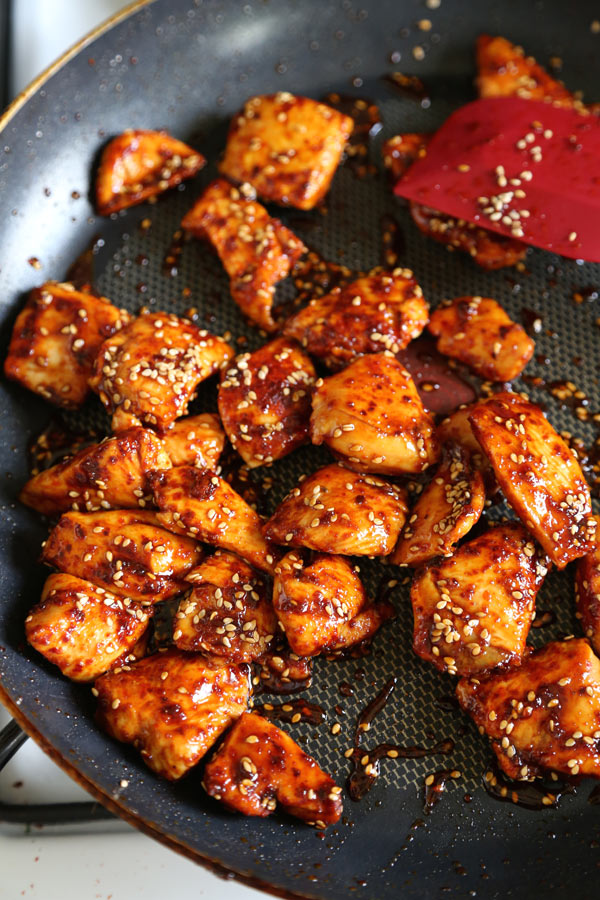 This coarsely ground dried red pepper is something you should get in your home kitchen, STAT!

Gochugaru is one of those integral ingredients that forms much of the architecture of how Korean food tastes.

Without it, many Korean recipes wouldn’t get that trademark smoky, spicy flavor profile they are so well known for.

You see, gochugaru is a sun-dried chili pepper, that is ground and used to provide heat in everything from kimchi to marinades to dipping sauces.

The consistency is kinda like a cross between a powder and chili flake. Split the difference between the two – and you have it!

While bright red in color, this can’t simply be replaced with something similar in appearance like cayenne powder.

While cayenne powder tends to be pretty neutral in taste (just hot), gochugaru has a more nuanced smoky, almost sweet undertone with the heat.

Cayenne would work in a pinch – but give gochugaru a shot when making this Korean sticky chicken in your home kitchen, and I just know you’ll taste the difference! 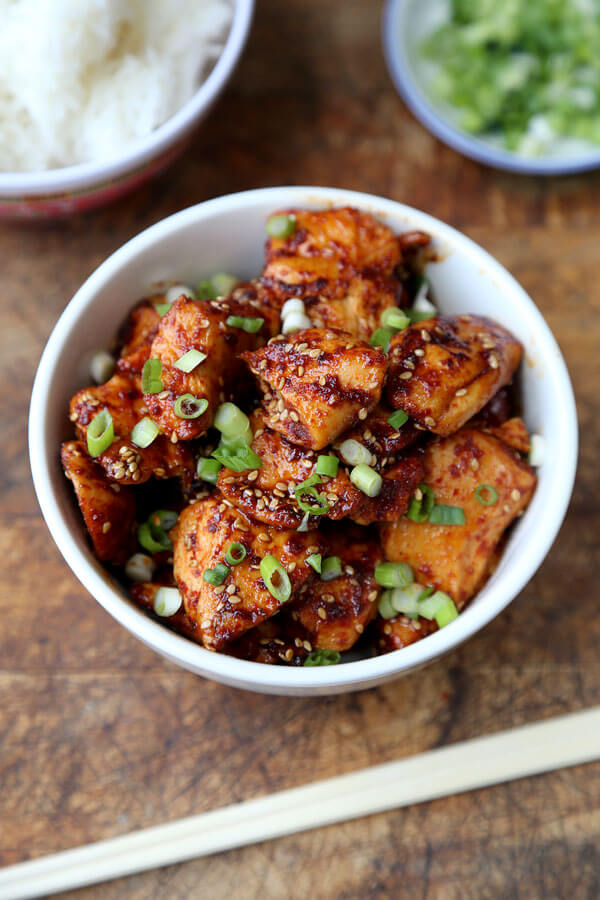 Gochugaru and honey: a match made in heaven

To deliver an understated and rich sweetness that compliments the fiery elements of the gochugaru, I use honey instead of sugar in this Korean chicken recipe.

With honey, you can go sweet in a flavor profile without going overboard into ‘cloying’ territory. Plus, it creates a sticky glaze that coats the chicken perfectly and flavors the rice below.

The intensity of the korean chili flakes just plays so nicely with the savory notes of the soy sauce and the lovely sweetness from the honey.

They all come together to form a flavor trifecta of sweet, savory and spicy! 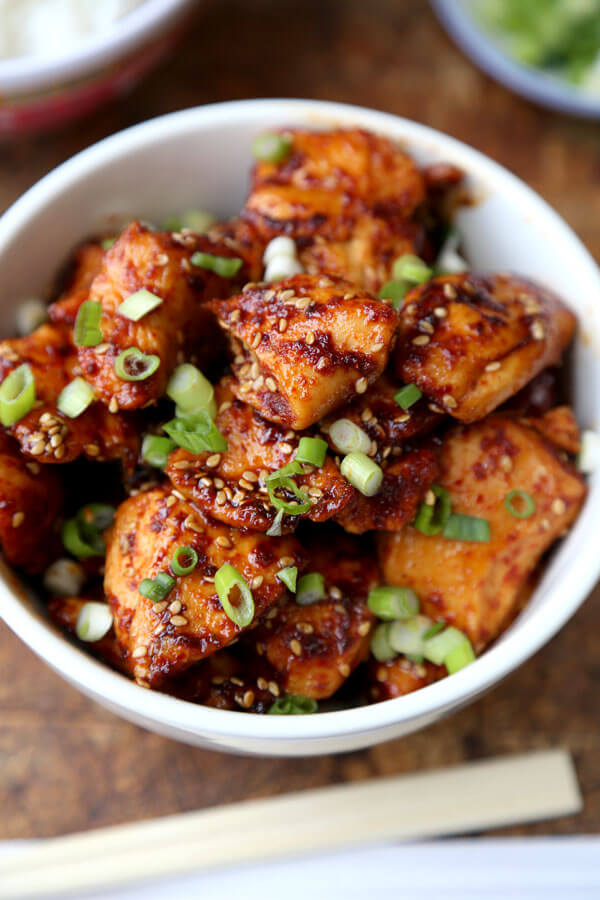 This is the perfect recipe to whip up at the end of a long, stressful day – when a eating proper meal may seem like the least of your immediate priorities.

However, as fast and simple as this Korean chicken recipe is to whip up, that first bite will liven up your other senses and maybe just hit the slow motion button on life for a second.

It’s awesome when food can provide, not only nourishment – but enough flavor to prompt us to slow down, look up and savor the moment.

Hey… it’s also nice that you get to exert a little primal energy by swinging the rolling pin too, right!?

One last piece of timing advice: you can totally make rice ahead of time and either refrigerate or freeze it. Pop it in the microwave when you’re finishing up the last, easy steps of this Korean sticky chicken recipe, and dinner will really be on the table in less than 15 minutes!

This is one of my all time favorite Korean inspired recipes.

And I hope it ends up on your dinner table soon!

How about you? What’s a meal you make when you want maximum flavor to come from minimum effort in the kitchen? I’d love to hear about it in the comments section! 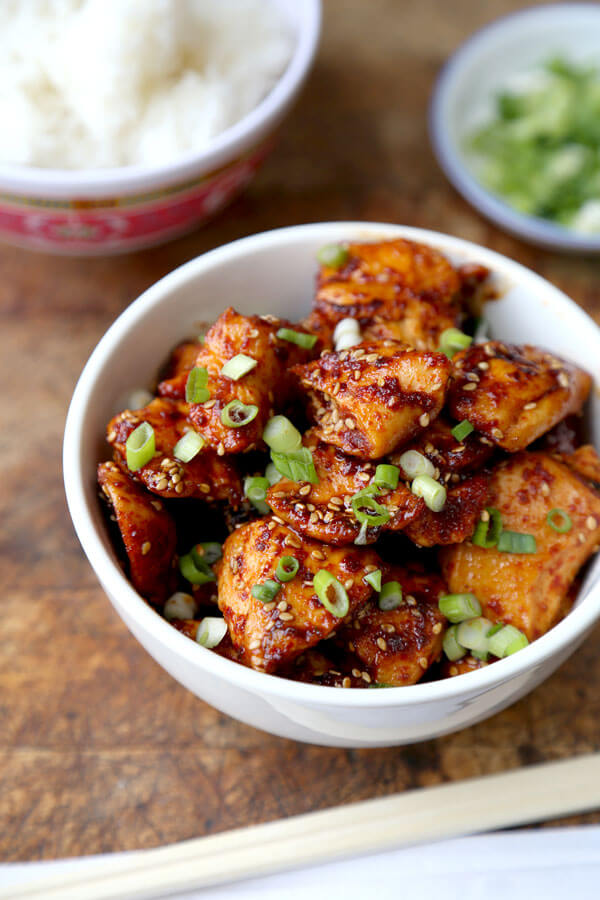 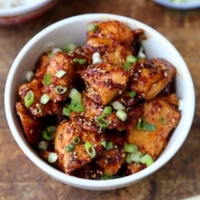 This is a delicious and quick recipe for Korean sticky chicken. A little hot, sweet and savory, it’s the perfect accompaniment to a steamy bowl of white rice! And it only takes 20 minutes to make from start to finish!

This Korean sticky chicken recipe will keep refrigerated for up to 3 days. 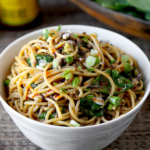 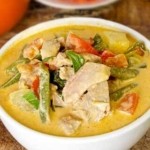 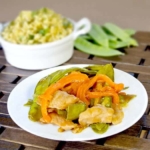