Are you ready for epic crunch? Not only is this Baked Chicken Katsu (チキンカツ) Recipe just as crispy as the deep fried Japanese original, it stays crispy even longer! 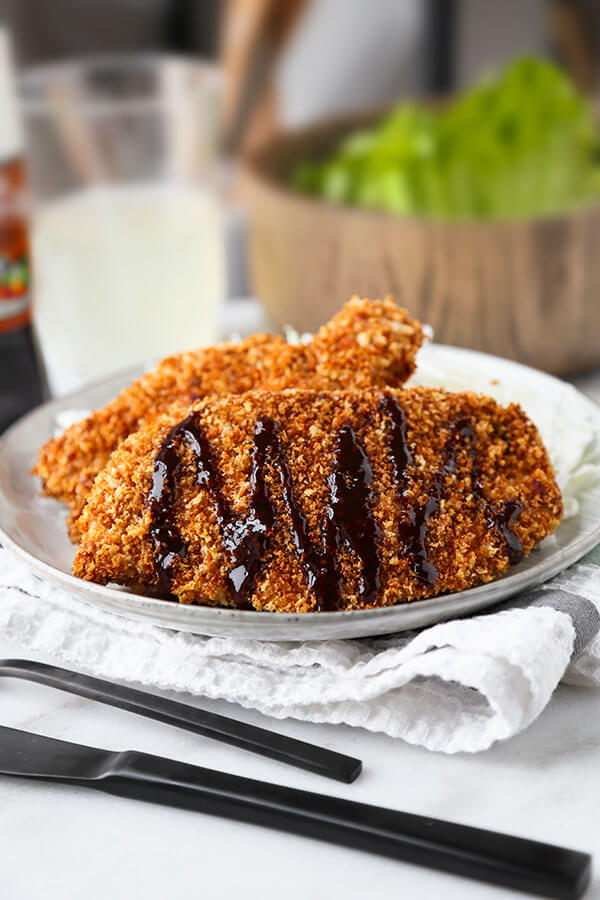 As flexitarians, Ben and I don’t eat a lot of meat.

Our diets consist of roughly 80% vegetables, fruits, beans and grains and 20% meat and fish. Well… More like 15% meat and fish and 5% chocolate for myself 🙂  On the days we do have meat, we make sure it’s well prepared and tastes great so we can fully enjoy it.

One thing we both love is fried chicken. We love it so much that we often reminisce about having KFC delivered to my old apartment in Toronto. Old school, unhealthy – yet so unbelievably delicious!

If I’m going to be an especially bad girl, I’m having KFC and a poutine and there’s nothing anyone can do about it, ha!

But finding healthier alternatives is always nice. Especially when that alternative is as crazy good as this baked chicken katsu.

It’s healthier than the iconic original fried chicken katsu – but with a depth of flavor and crunch that somehow make it seem more indulgent. 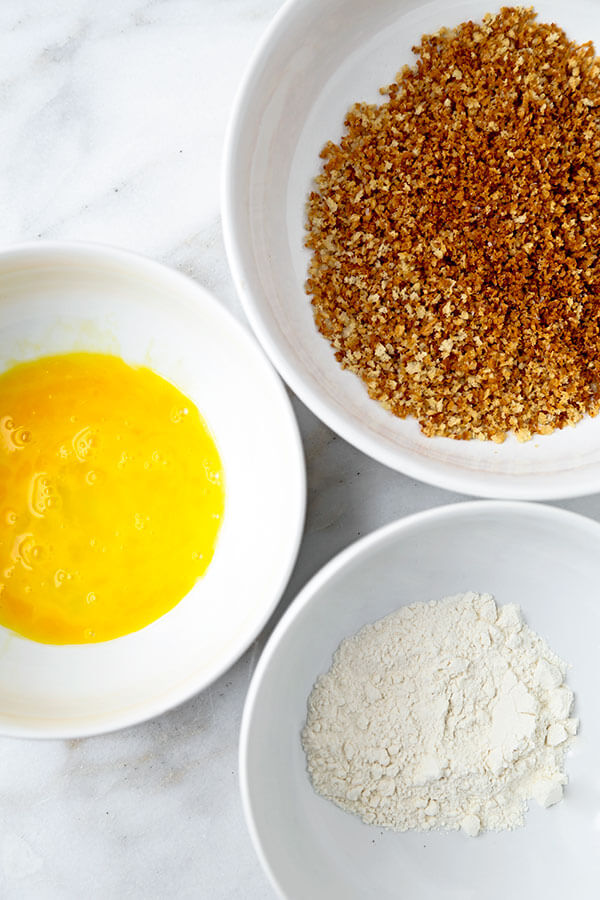 What is chicken Katsu?

Sometimes also referred to as torikatsu, this simple dish is usually deep fried, topped with tonkatsu sauce and served alongside shredded cabbage (or a green salad).

Now, if the word tonkatsu sounds familiar, that’s because it’s used when referring to both to the delicious Japanese BBQ sauce (more on that in a sec)  – and the fried pork cutlet it is normally poured on top of.

Yep – this Japanese baked chicken cutlet recipe is actually a healthier variation of tonkatsu (豚カツ) – which is a breaded and fried pork cutlet. And while the original is pretty dang delicious in its own right, I actually prefer the chicken version.

You might say this baked chicken katsu is a couple steps removed from the original pork katsu – both in the protein and preparation departments.

But, trust me, you’re going to love it!

So, what is panko?

When fried, they produce a light, airy crunch that is at odds with having been immersed in cooking oil. You see, panko breadcrumbs resist taking on cooking oil and grease.

Therefore, they result in a light and vivacious crunch – much more so than traditional breadcrumbs. 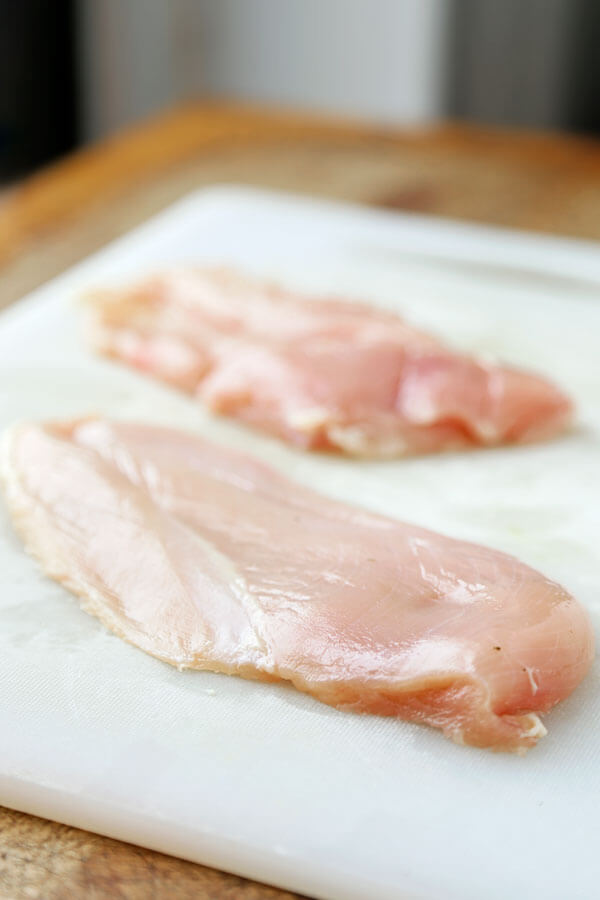 How to bake chicken Katsu

Ok, friends… This is the best part! Something tells me you’re going to be so happy when you see just how easy it is to whip up this Japanese katsu chicken recipe in your own home kitchen.

Now, when baking, the secret to those crispy panko breadcrumbs is to briefly toast them in a pan with a tablespoon of extra virgin olive oil.

When the breadcrumbs turn golden brown, transfer to a bowl and you’re ready to bake your chicken katsu.

This simple method ensures that the breadcrumbs will stay nice and crispy for a long time. When I shot this recipe, the chicken actually stayed crispy for four hours. Who knows how much longer it would have stayed that way if we hadn’t finally devoured it after the photoshoot!

Anyhow, I like to pound the chicken breasts to about a half-inch thickness. Then simply dip your chicken in flour, then in a beaten egg – and finally in panko breadcrumbs. Lightly press both sides to ensure they are evenly coated.

At this point, all we have left to do is bake them! Bake at 400°F for about 12-13 minutes on EACH SIDE. Once your chicken cutlets reach an internal temperature of 165°F, you’re good to plate them up and serve with tonkatsu sauce.

Hey, I told you it was easy! 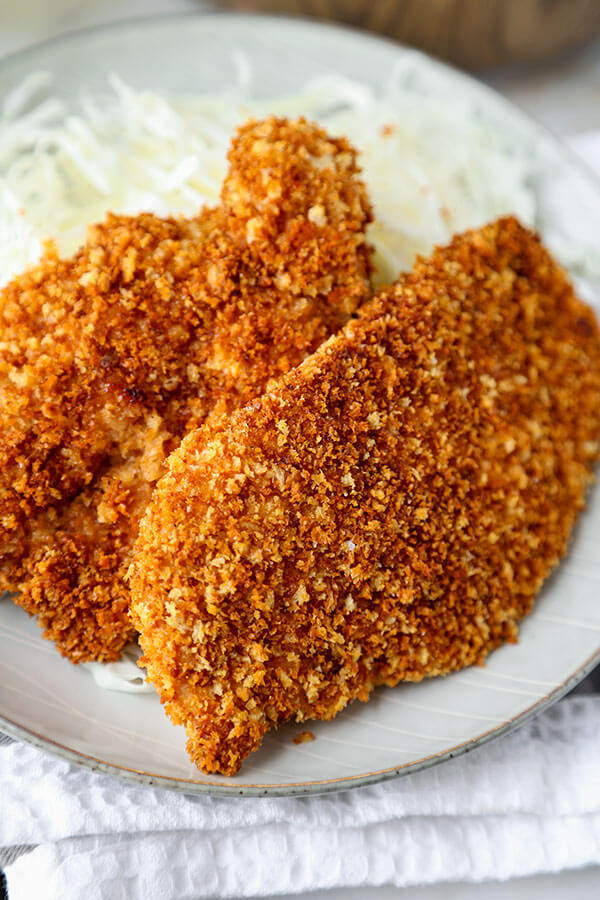 Now, this baked chicken katsu recipe is great on it own. And if you have a favorite way to serve breaded chicken cutlets, go for it! They would be delicious with anything from ketchup to BBQ sauce to mayo – or even tartar sauce.

But if you want to eat chicken katsu the way they do in Japan, serve it with tonkatsu sauce (とんかつソース).

To give you a quick (oversimplified) explanation, tonkatsu sauce is basically the Japanese version of barbecue sauce, but a bit sweeter and tangier.

You can find it at your local Asian super market or buy it here on Amazon.

But did you know that you can also make it at home with only 4 simple ingredients that I bet are in your pantry or fridge right now!? It’ll take you all of 2 minutes to make.

Seriously – follow this easy recipe for homemade tonkatsu sauce, and you’ll be devouring breaded chicken katsu cutlets in no time, without the trip to the Asian grocery store!

Here’s how easy it is to make:

The best part is that it’s a super versatile sauce.

I often swap tonkatsu sauce into recipes that call for ketchup because the taste is a bit more complex. It’s even sandwich friendly. Heck, you could say that tonkatsu goes pretty well with just about everything served on a bun! 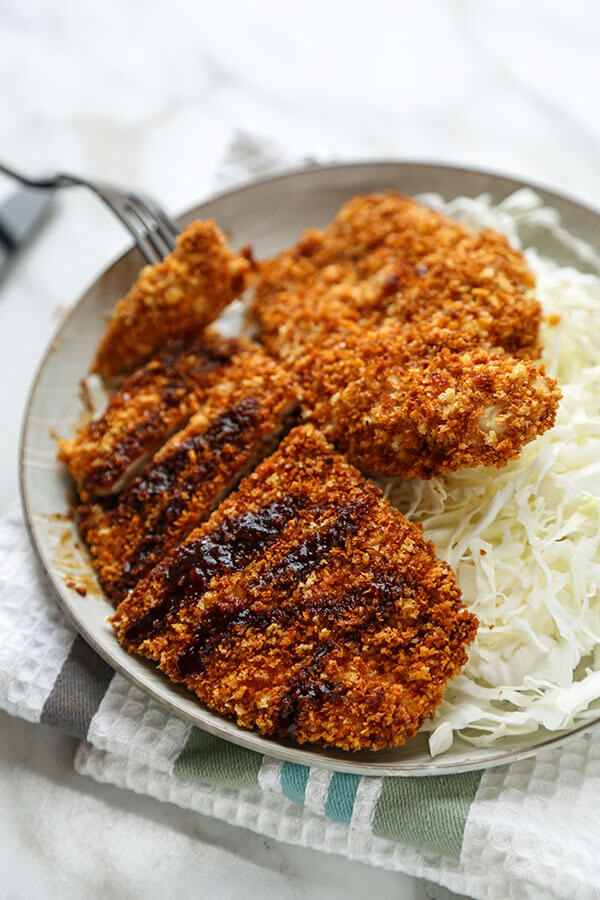 This chicken katsu is about to become your favorite baked chicken recipe!

Sometimes food can surprise us!

Who would have ever guessed that I’d prefer a baked chicken katsu recipe to the original fried version? Not me, that’s for sure 🙂

This baked chicken cutlet not only has the same delicious flavor as the original torikatsu – but even after you smother it in chicken katsu sauce, it manages to stay crispy longer!

It’s an easy recipe I’m only too happy to make on those days I’m craving both chicken and a taste of Japan!

What about you? Do you prefer fried or baked chicken katsu? Or are you a die hard fan of the original pork tonkatsu? Tell me about your preferences in the comments. 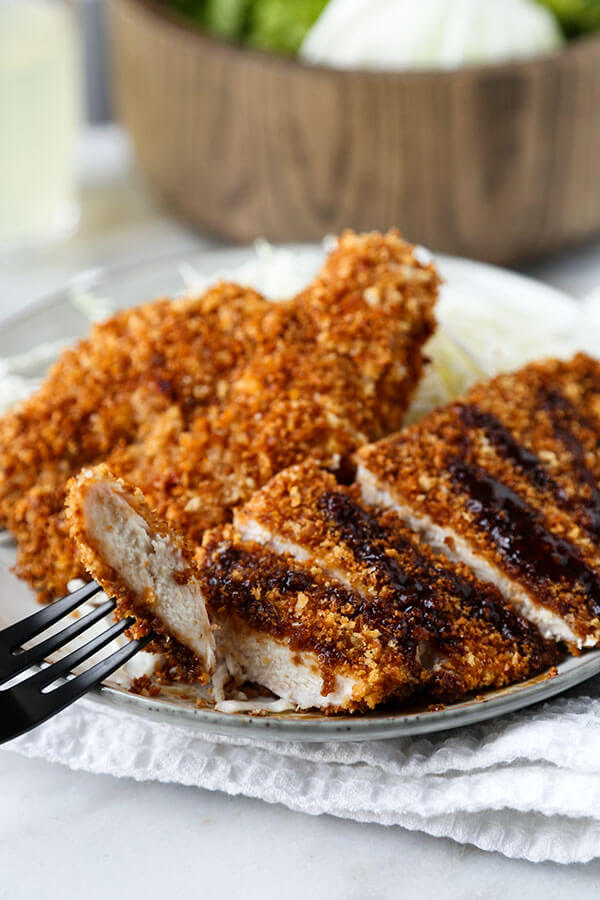 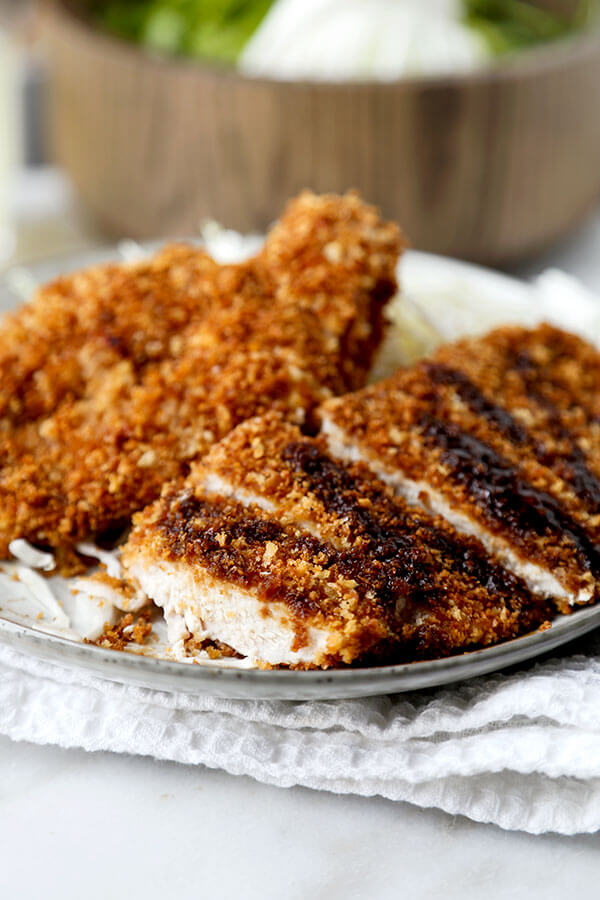 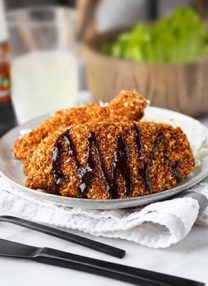 This baked chicken katsu recipe is just as crispy as the deep fried version and stays crispy even longer!