Say hello to your favorite Japanese condiment! This easy to make Tonkatsu Sauce Recipe is delectable with everything from Japanese breaded katsu cutlets to croquettes; even sandwiches! Tart, savory and sweet, this Tonkatsu Sauce (とんかつソース) only requires 4 pantry ingredients and under 2 minutes from start to finish! 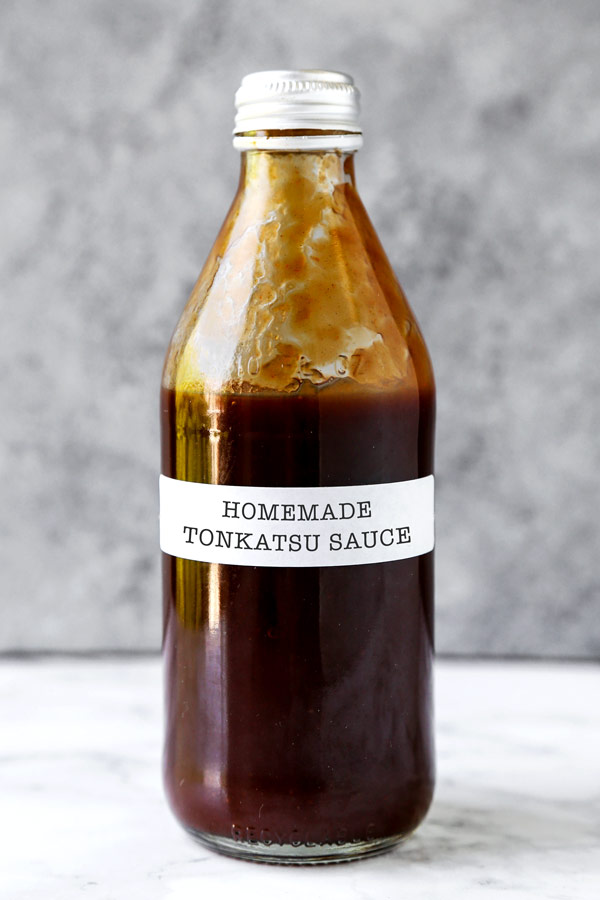 What is Tonkatsu Sauce?

Tonkatsu sauce – とんかつソース – (sometimes also referred to as katsu sauce) is a sweet and tangy Japanese condiment used for dipping or as a sauce for sandwiches. It’s made using a mixture of fruits and vegetables such as tomatoes, celery, carrots, apples, and prunes, a variety of spices, and condiments such as soy sauce and vinegar.

The word tonkatsu actually means pork cutlet so the literal translation for tonkatsu sauce is pork cutlet sauce. You might have seen it sold in Asian stores next to the ketchup or barbecue sauce. The Bulldog brand is by far the most popular tonkatsu sauce and is sold in three different flavors – Worcestershire (a spicier version), semi-sweet, and classic.

It’s been around since 1902, right around the time when western food was becoming popular in Japanese homes. The sauce was developed to accommodate the Japanese palate and was used on western dishes such as cutlets and other fried foods.

Tonkatsu sauce can also be referred to as Japanese barbecue sauce. Parts of the flavor profile you might associate with a good Western style BBQ sauce are represented in this iconic Japanese sauce. 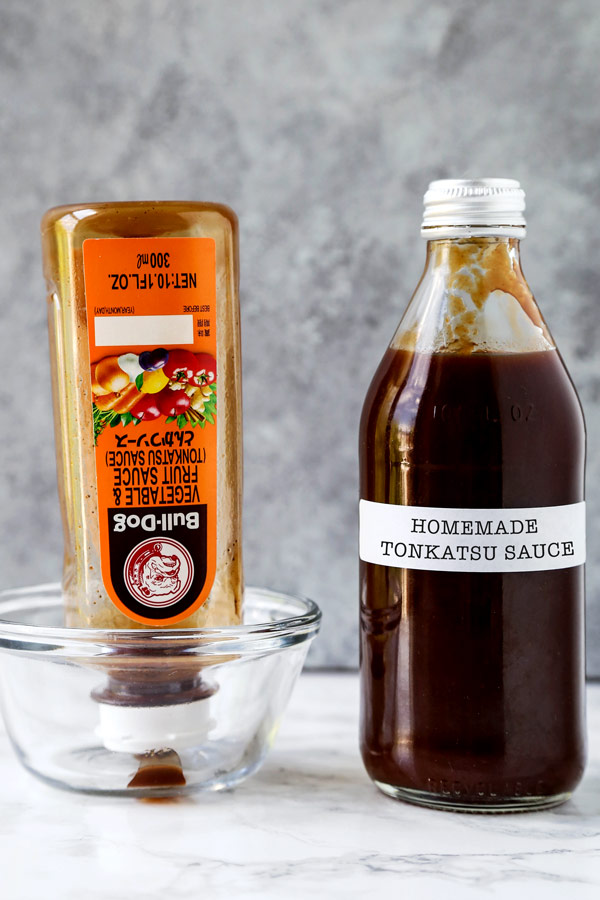 The recipe I create is to mimic the taste of Bulldog’s classic tonkatsu sauce as close as possible. If you prefer something spicier, adjust the sauce by adding a little more Worcestershire sauce. You could even mince a couple of Thai chilis and add them to the sauce.

If you prefer it sweeter, add more ketchup and a sprinkle of sugar. You could also substitute honey for sugar. 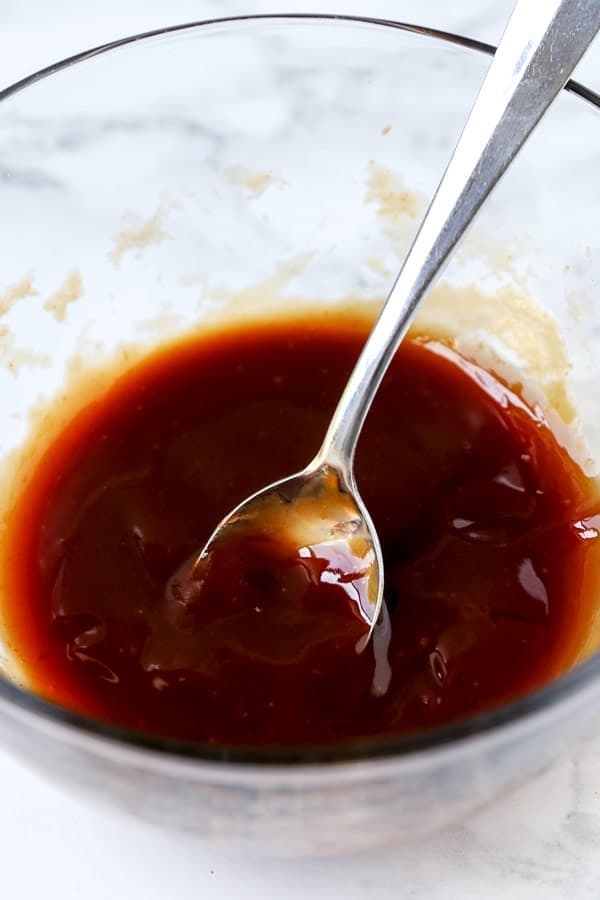 How to Make Tonkatsu Sauce

No, really, it’s that easy!

Mix all the ingredients in a bowl and transfer the sauce to a bottle. Leave it in the fridge until you are ready to use it.

How to Store Tonkatsu Sauce

Tonkatsu sauce should be stored in the fridge in an airtight container. It should last for several months. 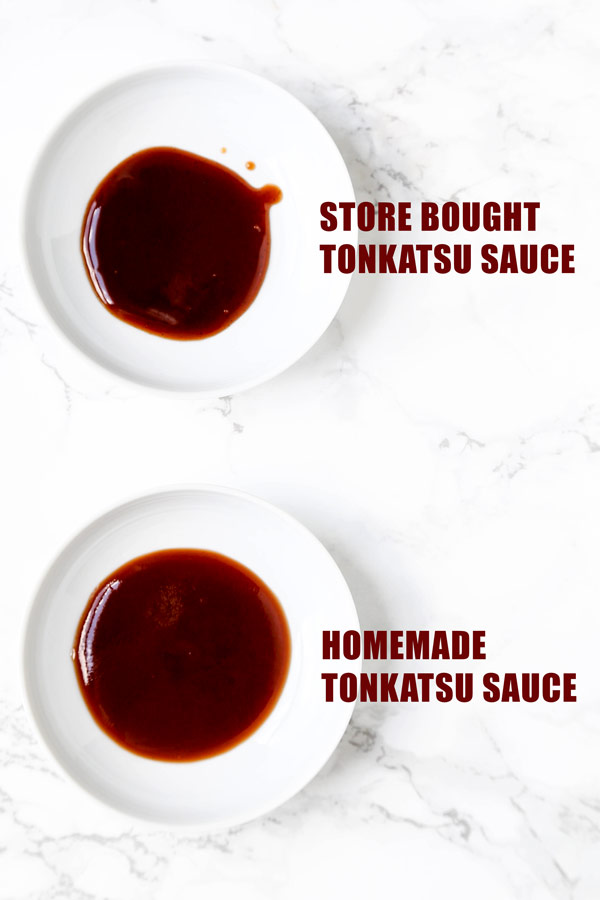 An easy way to think about sauce is that it’s kinda like a Japanese Worcestershire sauce.

These contrasting, yet similar types of Japanese sauce are differentiated primarily by viscosity and intended use.

Now – aside from the sauce thickness, there are different recipes for Japanese sauce that are intended to accompany dishes as varied as takoyaki, okonomiyaki, yakisoba and katsu.

While the tastes of these sauces (and their intended uses) may be slightly different, many of the base ingredients are the same. Therefore, it is absolutely OK to substitute one for another in a pinch.

In fact, I have used this homemade four-ingredient tonkatsu sauce many times when I’m making a simple yakisoba – or an okonomiyaki style omelet – at home. Although not the technically correct sauce, it gets the job done – and tastes delicious in the process! 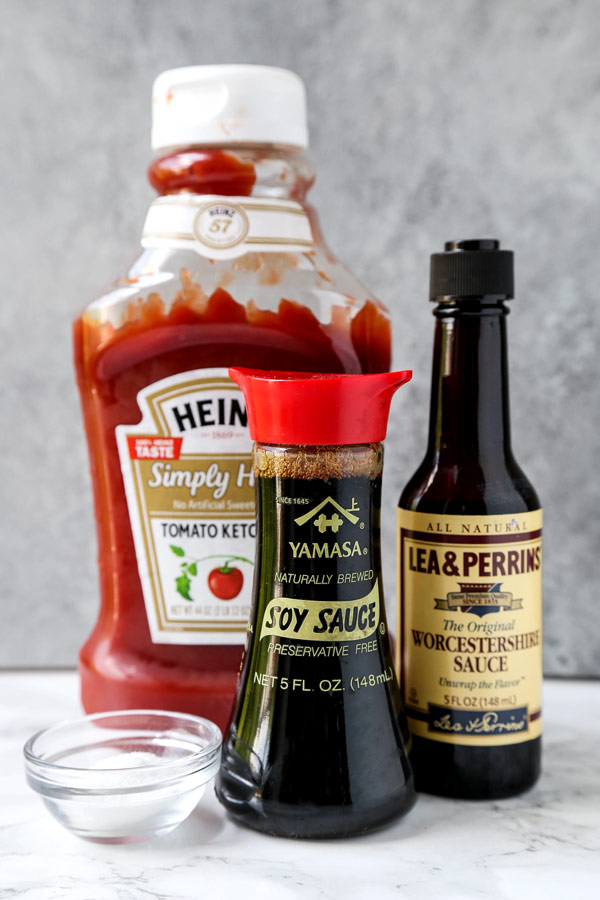 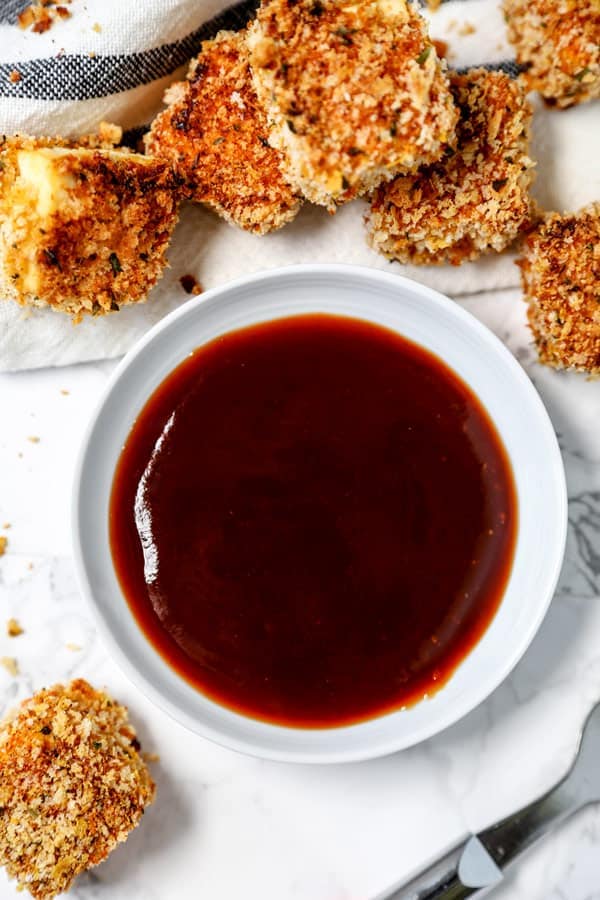 What to Serve with Tonkatsu Sauce

Now, there are a few no-brainers when it comes to pairing this sauce with a dish. The historically intended use is with Japanese breaded pork cutlets.

It would go super well with these as well:

Obviously, that’s just a few off the cuff ideas on dishes I think would pair well with this yummy Japanese sauce. 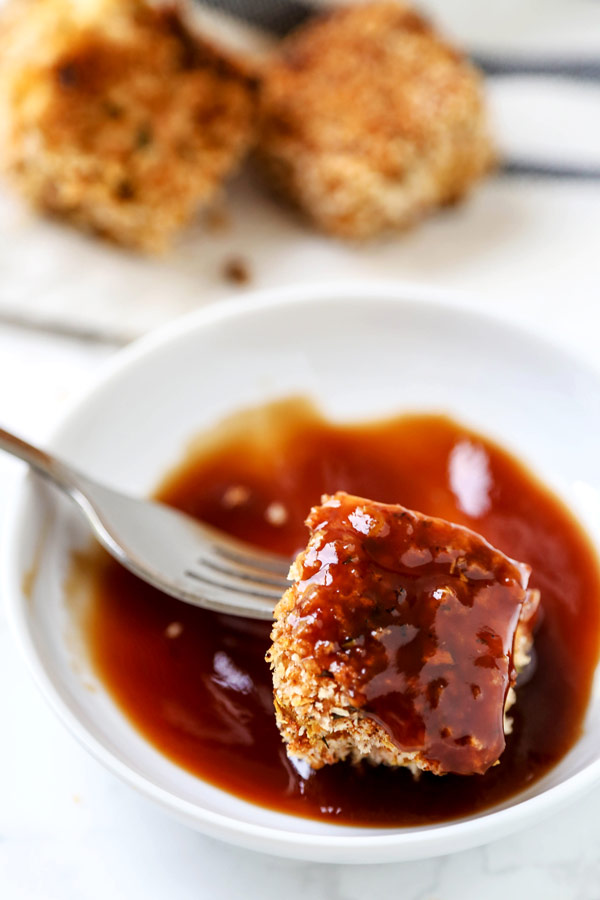 But, the fact of the matter is: it’s pretty much good with everything!

When asking yourself if you’re about to dig into a dish that might be better with tonkatsu sauce, you may find this question helpful: Would this be good with barbecue sauce or ketchup?

If the answer is yes on either count, then you know it’s gonna be good with this dead-simple tonkatsu sauce recipe! That means everything from eggs to sandwiches to burgers and fries (and all stops in between) are totally candidates for a little drizzle of this homemade Japanese sauce on top.

In reality, tonkatsu sauce isn’t just a great ketchup substitute. You can feel free to use this sauce as a tasty alternative to okonomiyaki sauce, takoyaki sauce and yakisoba sauce in a pinch.

Confession: I’ve even spread a thin layer of tonkatsu sauce on top of buttered toast.

And, was it delicious? 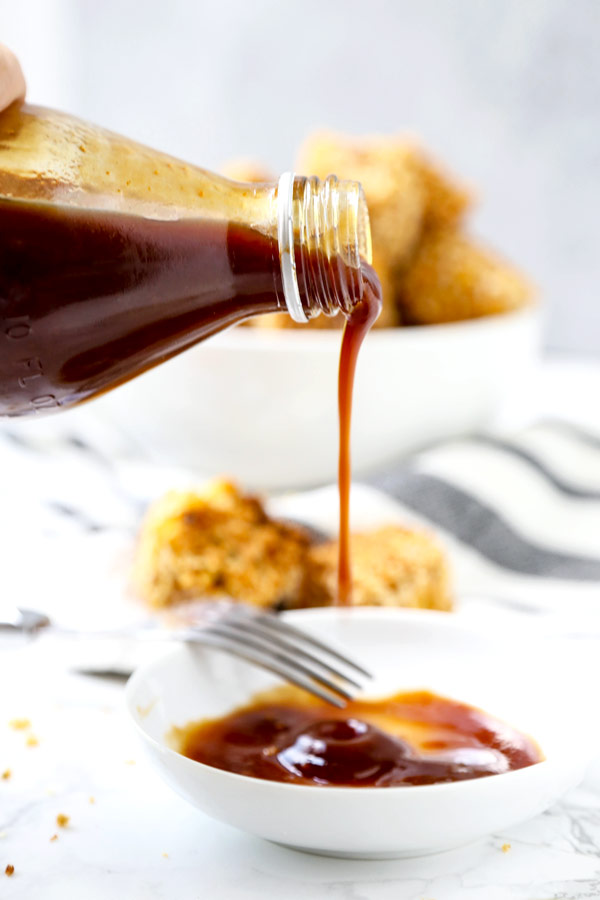 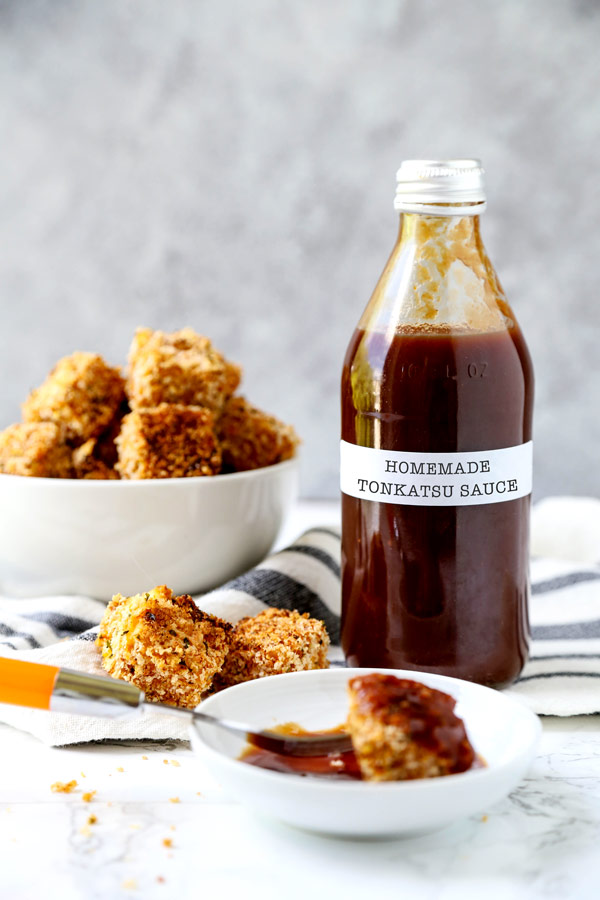 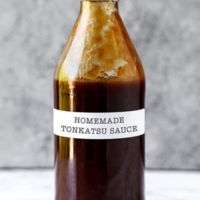 A classic sweet and smoky Japanese sauce ready in 5 minutes. 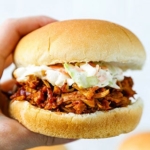 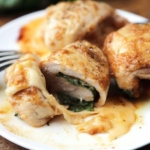 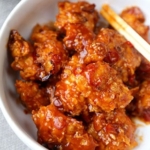