Japanese food aficionados most likely own every single item on this list. But for those who are new at making Japanese food and wanting to learn more about the cuisine, I’ve compiled a list of must-have Japanese ingredients to keep in your pantry. With these 14 ingredients you will be able to concoct plenty of popular and traditional Japanese dishes and impress family and guests!

It’s easy to feel intimidated by Japanese cooking. The food is usually dainty, the presentation beautiful, and the flavors are always spot on.

But what’s interesting to know is that the base of many Japanese dishes starts off with the same combination of ingredients. What changes are the measurements and the addition of a few extra seasonings.

What I’m saying is you don’t need to be a professional chef to make delicious Japanese food at home. As long as you have a pantry stocked with the basic ingredients mentioned in this list, you should be able to create many popular and well known Japanese dishes.

Soy sauce, called shoyu in Japanese, is the ultimate umami bomb. It’s one of the most commonly used ingredients in Japanese cooking as well as in many other Asian cuisines. Beside infusing dishes with umami, soy sauce is earthy, salty, sometimes even a little smoky.

While there are many different types of soy sauces available, it’s important to stick to the Japanese ones when cooking Japanese food. That’s because the taste of soy sauce can vary greatly from country to country. For example, Thai and Indonesian soy sauces tend to be on the sweeter side with a texture that’s more like syrup. Chinese soy sauces on the other hand are usually on the strong and salty side.

Japanese soy sauce is more delicate than other soy sauces and can also be more complex. The most popular types are koikuchi (dark colored), usukuchi (light colored), and amakuchi (sweet). I like amakuchi the best because the balance between salty and sweet is just right. Unlike Thai sweet soy sauce which is very sweet and sticky, amakuchi is light and just a tad sweeter than regular soy sauce. Amakuchi is the most used type of soy sauce in southern Japan, where my mother lives.

If you can find amakuchi, jump on it! It’s so much better as a dipping sauce for nigiri sushi, as a flavor enhancer, and to use as a marinade. I’ve only been able to find one bottle of amakuchi so far here in the US – Yamasa Amakuchi – and it’s only in Japanese grocery stores.

Mirin is often used to tenderize meats or to balance out the saltiness of ingredients such as soy sauce and miso paste. The taste is similar to sake but lower in alcohol and higher in sugar, giving it a sweet and slightly boozy taste.

I use mirin about as often as I use soy sauce since I tend to pair them together frequently. By using just these two ingredients and tweaking their ratio, you’d be surprise to see how many yummy Japanese recipes can be created!

The brands I use most often are Kikkoman Aji-Mirin and Mizkan.

Rice vinegar is used as a pickling agent, in vinegar based dishes such as sunomono, and to make dipping sauces and other sauces. It has a bright, acidic, and very refreshing taste similar to apple cider vinegar.

Look for plain rice vinegar that contains no sugar as the seasoned ones can be quite sweet and inauthentic in flavor.

Sake, which has a slight sweetness, is often used in tandem with soy sauce to create marinades, sauces, and nimono (simmered dishes). You can use regular sake that you get from the liquor store, or cooking sake, which is the one I use.

Do they taste different?

Slightly. Drinking sake has a sweeter taste than cooking sake, which contains salt.

My go-to cooking sake is by the Morita brand, but if I cannot find it I use Kikkoman’s Ryorishi Cooking Sake.

Dashi is what gives so many Japanese dishes that umami and slight mineral taste. Without it, Japanese food simply wouldn’t be the same. Usually made with a mixture of kombu and bonito flakes or sardines, dashi comes in powder form or can easily be made from scratch.

While I still like to use the Hondashi brand on occasion, I much prefer using a natural dashi powder that contain no added ingredients. They taste more authentic and are also milder. I like the Shimaya brand.

Bonito flakes are made of smoked bonito or skipjack tuna that has been fermented and dried into blocks as hard as wood – and then shaved into thin ribbons.

Bonito flakes are used to make dashi and are often added as a topping to salads and dishes like agedashi tofu, takoyaki, okonomiyaki. They can also be seasoned with soy sauce and stuffed in rice balls (okaka onigiri) which is one of my favorite onigiri flavors.

I think it’s safe to say that miso paste has a very unique taste, which makes it quite difficult to describe. It tastes fermented, salty, nutty, and has plenty of umami. It’s used in soups, as a marinade, and to pickle vegetables (tsukemono). And it’s even added to desserts!

There are three types of miso pastes that are most often used in Japanese cooking:

I personally love awase miso as it has more depth of flavor than white miso paste, but doesn’t have the smoky and extra salty elements of red miso paste (which can be overwhelming).

The nutty taste of sesame is quite prevalent in Japanese cooking. You will find that a dash or a drizzle of toasted sesame oil is often added as a finishing touch to many washoku (traditional Japanese) dishes. That’s because toasted sesame oil has a much lower smoke point than regular sesame oil, and can turn rancid quickly if it’s cooked for too long.

Only use toasted or roasted sesame oil for Japanese cooking. The flavor is much more powerful so you only need to use a little bit.

Although the Kadoya sesame oil label doesn’t mention the word roasted, the fact that it’s a product from Japan means that it automatically is. I’ve been using Kadoya for years and really love the intense nutty taste.

Whole sesame seeds (black and white) are also very popular and often used as a decorative topping. Another common way to eat the seeds is by grinding them with a sesame seed grinder to release the oils, for a more aromatic experience, and stir them into a dish.

Potato starch is very similar to cornstarch in that it’s used to thicken sauces and soups and act as a coating to make certain deep fried foods crispy.

Both ingredients are so alike that they are interchangeable. Honestly, I think it comes down to the fact that Japan is used to cooking with potato starch, and China with cornstarch. Nothing else.

I read somewhere that using potato starch can keep a sauce gooey for a longer time than cornstarch because of its slightly thicker texture. But I personally haven’t noticed a difference.

Seaweed of all forms has a prominent spot in Japanese cooking.

Kombu is a brown seaweed from the kelp family that’s used to make dashi, toppings for rice, and drinks like kombucha. When cooking with kombu, it’s important not to wipe out too much of the white dusting that sits atop each piece because that’s where most of the umami comes from (it’s 100% natural). Use a damp cloth to gently wipe off some of the dusting.

Wakame is a smaller seaweed used in soups like miso soup, in salads, and sunomono dishes (vinegar based).

Nori is seaweed that’s been shredded, pressed into thin sheets, and left to dry. Sometimes it’s lightly roasted and seasoned. It’s mostly used as a wrap for sushi rolls and onigiri and as a topping for dishes such as ochazuke.

I always keep these three in my pantry at all times.

Ichimi togarashi are ground red chili peppers used to enhance the flavor of noodles and rice dishes. It adds a little heat but nothing like what you find in Sichuan food.

Because Japanese people are very sensitive to spicy foods, only a dash of ichimi is used as a finishing touch to dishes like udon, ramen, and gyudon.

S&B is my go-to brand for ichimi.

The staple of Japanese cooking, white rice makes an appearance at almost every single meal.

Making good rice is so important in Japan that the quality of nigiri sushi sold in high end sushi restaurants is judged by the quality and temperature of the rice, not the fish.

To make the best Japanese rice at home, look for short grain koshihikari rice, and use a rice cooker (click here to read my tutorial on how to make Japanese rice). Using a rice cooker ensures that your rice will come out perfectly cooked and look moist and glossy, each and every time.

The brand I always use is Tamanishiki. They also have a delicious short grain brown rice I recommend you try!

And finally, noodles! Noodles are as much a staple in Japanese cooking as rice is. They are used in soups and stir fries, are served cold in the summertime, and are dried and sold as instant meals. You can never get bored of eating noodles in Japan!

There are so many types of noodles to choose from but the most popular ones are:

I recommend keeping a few different types of noodles in your pantry for variety. As you become more and more familiar with Japanese food you will go through your stash of noodles so quickly, you’ll have trouble keeping it fully stocked! 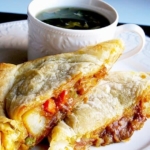 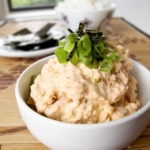