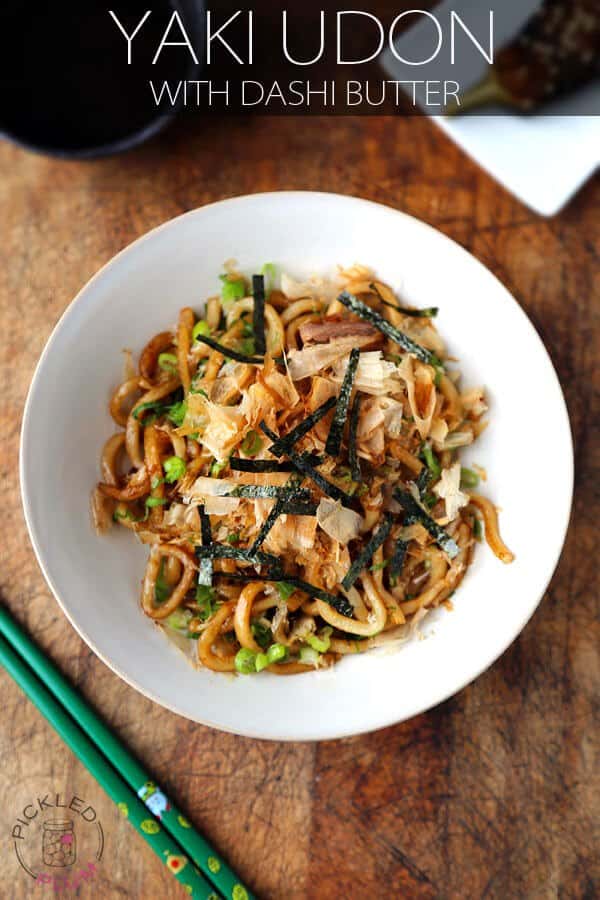 There’s nothing better than eating out in Japan.

Yeah – I know that’s a bold statement. But, for me, some of the most memorable meals I’ve ever experienced have involved a table loaded with a ton of Japanese dishes in cities like Kyoto, Tokyo, Nagasaki and Fukuoka.

The first time I tried yaki udon (やき うどん) was on a Tuesday evening, a couple nights before Ben was due to fly back to New York and leave me for some one on one time with my mother. My cousin and his family invited us out to dinner at their favorite yakitori bar in downtown Iizuka, Japan.

While the bar itself was quite small – off to the side were private rooms behind sliding screen doors for larger groups like us. We were led to one of them and we sat around a large wooden table facing an aquarium filled with live squid!

The waiter then brought over a couple of large bottles of Kirin Beer and proceeded to take our order.

Lemme tell you, the menu was HUGE! One page listed every single part of a chicken (including bones and organs) that could be served skewered and seasoned with either salt or tare sauce. Yakitori literally means grilled chicken btw. 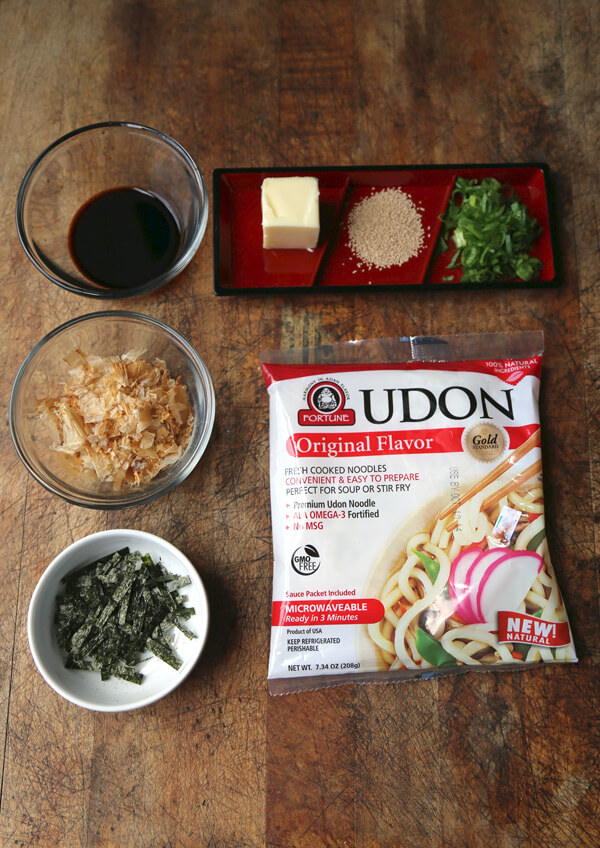 When in doubt, leave the ordering to the pros

We left it up to my cousin and his wife to order. They knew the entire menu super well – and were treating us to an absolute feast!

Dish after dish made their way to our table.

Phew! It was a never ending cavalcade of yummy Japanese food and drink.

But, my all time favorite dish that night was a simple pan fried udon noodle recipe called yaki udon.

While it was an udon recipe made with obviously very few, humble ingredients, there was just something really special and unique about the way the flavors harmonized.

You know I wasn’t about to leave without the recipe! Or at least a deep dive into the flavors.

Every bite I took became an adventure of sorts – a quest to discover each ingredient used and how the chefs were able to infuse so much flavor into the structure of the udon noodles themselves.

I came back to New York literally dreaming about yakiudon. As I began to test a few theories, I started at the beginning: what is udon? 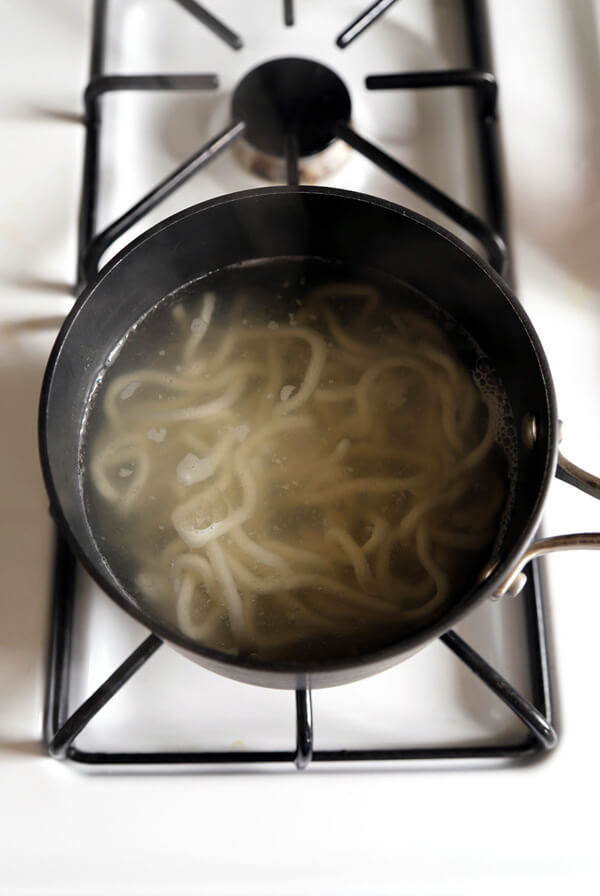 What are udon noodles?

Udon (うどん) is a thick noodle made from wheat flour. Frequently seen in Japanese soups – or served alongside dishes like tempura – these noodles are typically quite chewy and much thicker than other Japanese noodles like ramen and soba.

One of my favorite aspects about eating udon is that, in Japan, you will find preparations that match the season.

For example, in the hot summer months, cold dishes like bukake udon and zaru udon are served with light summery broths. A great way to beat the heat!

However, in the winter months, you can expect to be served more hearty and warming preparations like curry udon and nabeyaki udon.

This yaki udon recipe we’re making today is served hot – but differs from many udon recipes in that it is served without broth.

Yaki udon is versatile (and delicious) enough to be served in the winter or summer. Better bring your appetite! 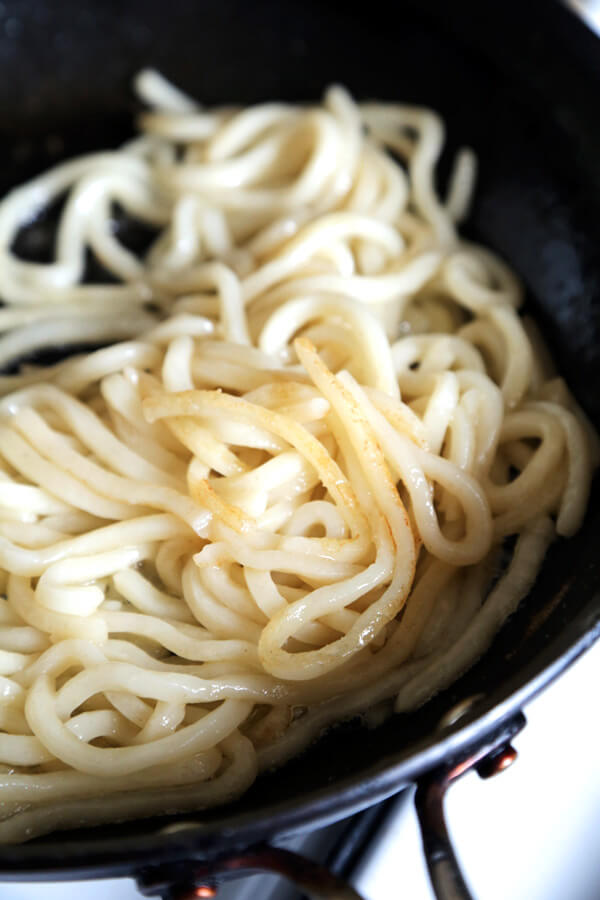 How to cook udon noodles

Most store bought udon noodles will come one of two ways:

For this recipe, I prefer the partially precooked noodles (sometimes labeled as fresh on the packaging). After a quick boil, they tend to have that amazing soft and chewy texture you get when eating fresh noodles at an udon restaurant.

But the dry udon noodles work as well. So don’t worry if you can’t find fresh.

However, no matter which type of udon noodles you use, make sure to read the instructions for the proper boiling times for that particular brand. Because when it comes to pasta in general, whether it’s spaghetti, udon or soba – an overcooked noodle is a tragedy 🙂

For this yaki udon recipe, after boiling, I’m stir frying the cooked noodles in butter and dashi so the noodles themselves become permeated with savory, umami goodness! 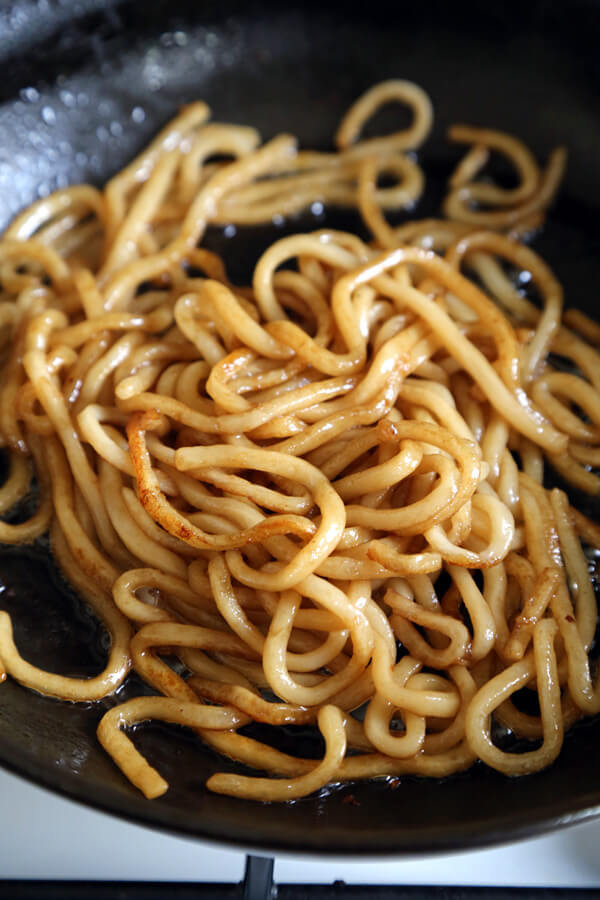 Now – here’s where the rubber meets the road, so to speak. Making these savory yaki udon noodles is as easy as using a few simple ingredients to create a flavor profile greater than the sum of it’s parts. Let’s cook!

First, I like to prepare the noodles as I’m doing my other prep so they’re ready to go into the frying pan when the time comes. Whether you’re using packaged, pre-cooked udon – or dry udon noodles – be sure to follow the instructions on the package for optimal boiling times.

Then, in a pan over high heat, I like to get my butter going with the dashi and water mixture. Swirl that mixture – and once it begins to bubble, add your cooked udon noodles.

Fry the noodles long enough for them to get just slightly crispy. But don’t go overboard here. We just want a bit of browned texture. Not carbon!

Next, simply add your soy sauce, turn off the heat and coat well.

Transfer your yaki udon to a plate and top with your chopped scallions, katsuobushi (bonito flakes) and nori (seaweed).

The flavor is savory, with a ton of umami from the soy and katsuobushi – with a touch of brightness from the scallions..

But, in my opinion, what absolutely MAKES this particular yaki udon dish is the addition of dashi to the butter as it melted. And, in the end, I believe it’s this trick that infused the flavors into the thick noodles themselves.

Now, you should be able to find the ingredients for this yaki udon recipe at any Asian grocery store. Or, you can just pick them up on Amazon: 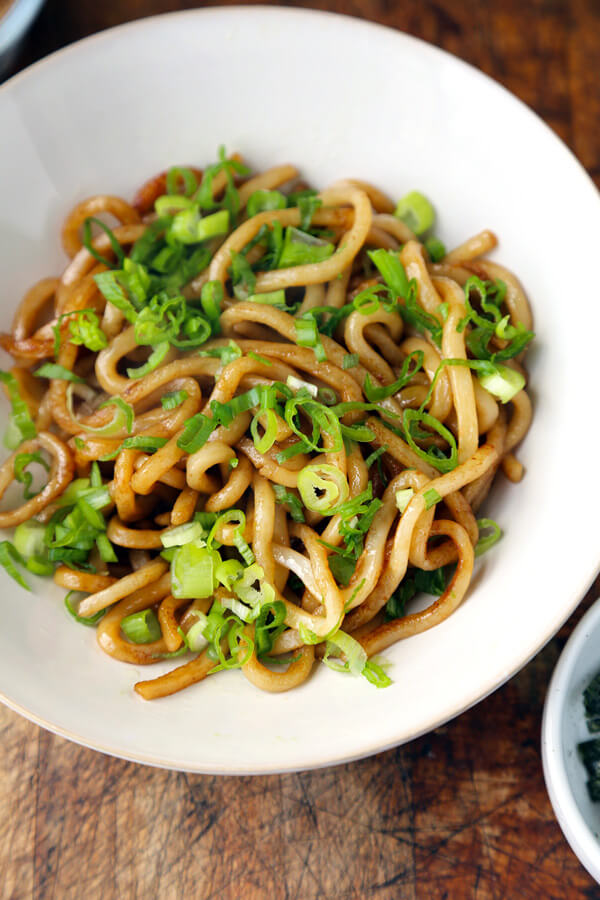 A few types of noodles in Japanese cuisine

Now, there are a ton of noodles used throughout Japanese cooking. And it can get a little confusing.

But if you’ve ever wondered about udon vs ramen – or soba vs udon, this section is for you! The following should shed a tiny bit of light on the other main types of noodles used in Japanese cooking (without going overboard).

Slightly oversimplified? Yes, sure. But hopefully that gives you a general understanding.

And, hey… a bit of background is great, but we’re all about the cooking and eating of the food, right!? 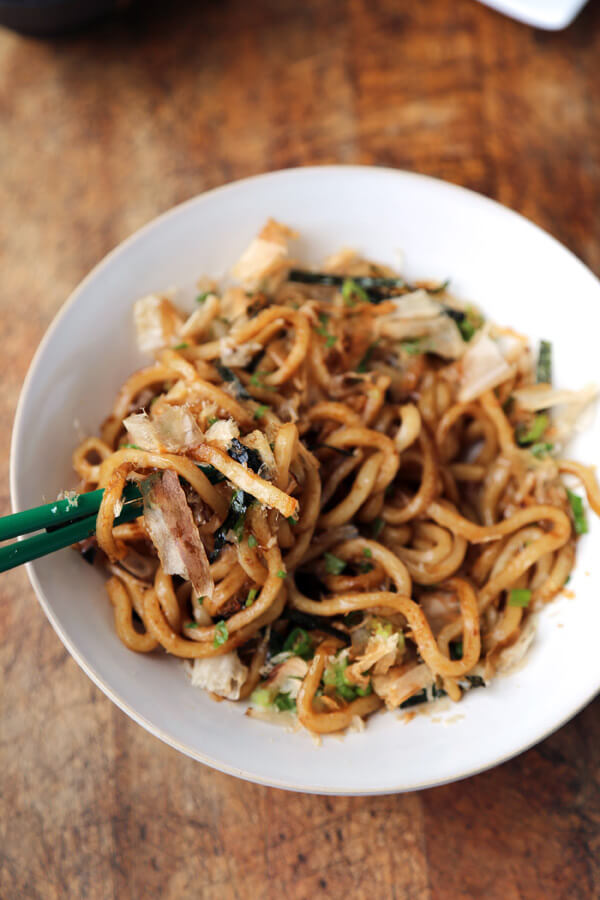 I put a ton of effort into recreating the spectacular yaki udon recipe I had on that yummy evening at a small yakitori joint with my cousin.

And after a little trial and error, I think I nailed it!

The result: divine yaki udon – very close to the original dish I tasted back in the south of Japan. Delicious! You’re going to love it with an ice cold beer – and a table loaded with hearty Japanese drinking snacks! 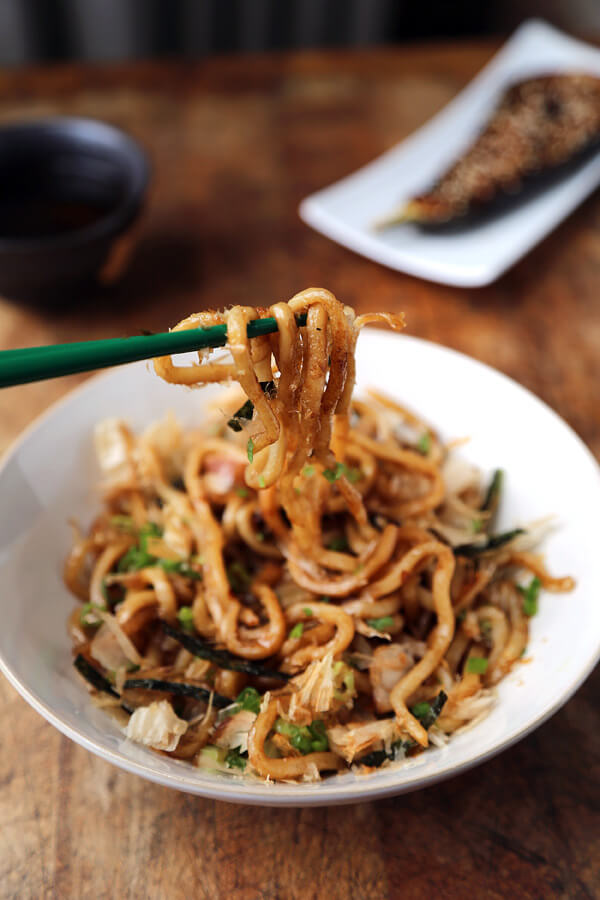 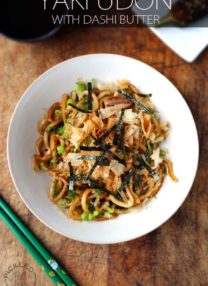 This Yaki Udon Recipe Is:
Low in Sugar

This yaki udon recipe will keep in the fridge for 1-2 days. 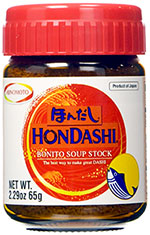 Dashi powder – the secret to these amazing noodles and to delicious stock soups! I always have dashi in my pantry.[/cap] 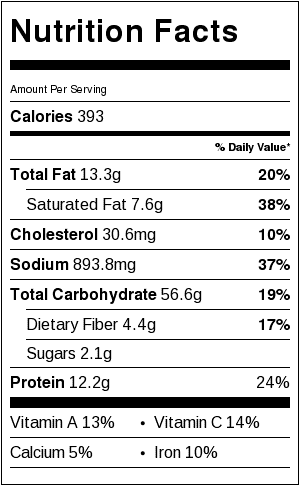 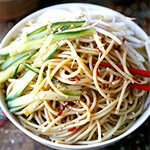 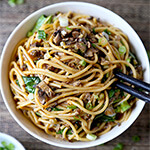 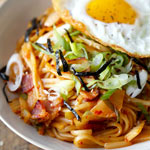