Take a trip to Tokyo with these easy Japanese salad recipes! From traditional recipes like sunomono – to Japanese steakhouse favorites like carrot ginger dressing, I’ll show you how to make some of the most popular and delicious salads from Japan! Plus, read about the differences between washoku and yōshoku – and how an Italian bagna cauda can actually be prepared in a Japanese style.

There are quite a few salads I gravitate towards when looking at the menu at a Japanese restaurant. And I always find it intriguing to see traditional Japanese favorites like sunomono and hijiki salad right next to things like potato salad, bagna cauda and caprese.

But when it comes to Japanese cuisine, there are a couple of classifications that blur the lines a bit.

What is Washoku? What is Yōshoku?

Yōshoku is food that contains some Western ingredients, but is prepared in a style that appeals to the Japanese palate.

Now, there are both washoku and yōshoku salads on this list. But, in Japan, the distinction between the two has become so blurred that something like potato salad can totally be considered Japanese!

This is that iconic salad dressing you’ll find served at hibachi joints, sushi restaurants and Japanese-American steakhouses. Sweet, savory and tangy, this one is deceptively easy to make at home in less than 10 minutes. It’s just a simple blend of carrots, onion, rice vinegar, salt, soy sauce (and a few extra ingredients). You’ll mix in a neutral oil (like canola oil or your favorite vegetable oil) while it’s in the blender. See the step by step video here. My favorite is to pour it over a simple wedge of iceberge lettuce – but you can obviously serve atop more elaborate salads. This wafu dressing will have you making more salads at home. I promise!

Light and refreshing – sour and briny. This cucumber and wakame salad is tossed in a simple vinegar and soy sauce based dressing. And it’s ready in no time. Now, you may have tried a version of this salad that contains sliced octopus. Many izakayas serve it that way. So, if you’re so inclined, feel free to add it. But you don’t need to take a trip to the fishmonger to make this delicious salad. 7 ingredients is all it takes to whip it up at home.

I love all types of potato salad. But the Japanese version is my favorite by far. It’s creamy and chunky. Yukon Gold potatoes work really well, because they have a natural sweetness, and aren’t as mealy as other variants. The secret is in the mix. Ginger adds a bit of heat without being spicy – and sake delivers a sweet sharpness. Carrots and pickled cucumber impart color and texture. The start of the show is the Japanese mayonnaise. See how easy it is to make Kewpie style mayo at home in this step-by-step video. This potato salad will disappear fast at your next backyard BBQ.

My mom used to make this sesame seed loaded Japanese side dish all the time. Therefore, when I think of spinach, I think of horenso goma-ae. But you don’t have to use spinach. Common variations are made with burdock root, mustard greens, asparagus, carrots and green beans. But no matter which veggie you use, it’s the same nutty, savory and sweet sesame sauce in play. A word to the wise here: when you blanch spinach, the volume decreases pretty quickly. So get the big container at the grocery store!

Otsumami are Japanese snacks meant to be savored alongside drinks. So whether I’m having a beer at the end of a long workday – or a whisky highball when I’m at an izakaya with friends – hijiki salad is a plug and play solution to the ‘what should we nibble on’ conundrum. Hijiki seaweed is thin and short and black in color. Since it doesn’t have much flavor on its own, hijiki is typically simmered in a sauce that introduces flavor. Mine is made with dashi, soy sauce, sake, mirin and sugar. Dashi is the sea stock that provides the flavorful backbone of so much Japanese food. Learn how to make dashi from scratch here.

Do you like it tart? Well, this seaweed salad is pucker worthy. This was actually my favorite salad as a kid. And, while my brother found the texture of the wakame kelp a bit challenging, I couldn’t get enough. If you find slightly slimy textures to be off-putting, don’t worry. I’ve got you. The secret is to serve it ice cold. Rice vinegar makes it tart, mirin makes it sweet – and fresh grated ginger gives it bright burn. Make this vegan salad anytime you’re needing a true taste of Japan.

This Japanese salad dressing is nutty, creamy, slightly sweet and loaded with umami. Whether from a bottle or homemade, sesame dressing is typically a simple mixture of toasted sesame oil, sesame seeds, rice vinegar, sugar and salt. I’ve added a bit of sesame paste to introduce a bit more creaminess – but you can also use tahini. Serve over green salads, tomato salads, or even use it as a marinade for meats, seafood or tofu. I’ve even used it as a condiment. The taste is out of sight! While you can keep it in the fridge for up to 2 weeks, you’ll probably use all way sooner than that. That’s OK. It’s easy to make more.

If I had to choose a favorite sandwich of all time, it would probably be the Japanese egg salad sandwich. And whether I’m making it at home or heading to a konbini (convenience store) like Lawson or Family Mart, I really have to fight my impulse to buy EVERY tamago sando I can get my hands on. The secret is the Kewpie style mayo. Japanese mayonnaise is fruitier and tangier than its American counterpart. Add a touch of umami to that flavor profile and you’ve got yourself a winner. Learn how to make Kewpie style mayo from scratch here – and level up your own egg salad sandwich game in the process!

This kani salad is light yet creamy, sweet yet salty – tastes complex yet is ready in 10 minutes from start to finish. And the brain teasers don’t stop there. You see, kani means ‘crab’ in Japanese. Strangely enough, the imitation crab that is commonly used in Japanese kani salad is typically made of pollock rather than actual crab. Nevertheless, it’s delicious. And this is the Japanese salad I crave most when I need a taste of my mother’s home cooking. For me, it’s comfort food of the highest order.

Watercress is a powerhouse of the vegetable world. It’s from the same family as kale and broccoli. And my favorite way to eat this vitamin K loaded leafy green is to quickly blanch it and then dress it with a simple combination of rice vinegar, peanut butter, soy sauce and mirin. If you like it on the sweeter side, you can use a bit of honey or sugar. What’s your favorite way to eat watercress? Tell me about it in the comments!

Of the many Japanese variations on cabbage salad, this one packs a real punch. And don’t worry if you’re in a hurry! While you can shred cabbage and carrots, you can totally use a bag of pre-shredded coleslaw mix from the grocery store. Then you’ll mix up a quick 4 ingredient dressing that’s both savory and sweet. The real secret to making the best Japanese coleslaw is using katsuobushi (bonito flakes). They impart a wonderful smokiness. Top with toasted sesame seeds and you’re good to go. Watch the step-by-step video here. I take this to every cookout I’ve ever been to. And, trust me, it goes fast.

Wait, what makes this classic Italian salad Japanese? Answer: the Japanese onion vinaigrette. It’s sweet, umami and slightly pungent – and it pairs so nicely with vine fresh tomatoes and mozarella. It’s a simple combination of finely chopped shallots, rice vinegar, toasted sesame oil, sugar and soy sauce. If you’d like a gluten free alternative to shoyu, try tamari or liquid aminos instead. This is actually the perfect example of yōshoku cuisine: Western ingredients prepared specifically to appeal to the Japanese palate. You’ll find Caprese salad at tons of restaurants throughout Japan. Don’t forget the fresh basil!

It’s ramen – and it’s salad. Japanese hiyashi chuka is my personal favorite when summer temps become unbearable. This chilled ramen noodle salad is served with ribbons of sliced egg omelette, lettuce and cucumbers. Traditional versions include sliced ham, but I’ve opted for shrimp. Mixing salad and cold ramen noodles is about as playful as Japanese salads get. And it’s the most refreshing of light lunches that still manage to fill you up in the process.

Sure, bagna cauda originated in the Piedmont region of Italy. But the presentation of this iconic side dish is all Japanese. A Rubik’s cube of veggies dipped in a heady, creamy mixture of garlic, olive oil, anchovies and cream is sure to impress at your next dinner party – no matter where you live. I used carrot, cucumber, daikon and kabocha squash – but feel free to use the veggies you like best. However, while plenty of variations on the classic exist, this recipe needs the anchovies. Don’t leave them out! If you’re a fan of pungent, savory goodness, this one is for you.

Have you tried any of these Japanese salad recipes? Are there changes you made that you would like to share? Tell me all about your personal tips and recommendations in the comments section below.

This iconic and delicious Japanese Carrot Ginger Salad Dressing Recipe will transport your taste buds to Shibuya! Ready in 10 minutes from start to finish.

This dressing will keep in the fridge for up to 2 week.

You can use olive oil but the flavor will be slightly different since it’s not a neutral oil like canola or vegetable. It will still be good though! 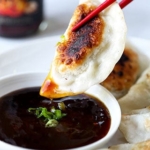