The spaghetti of my childhood! Make this delicious Japanese-style ketchup spaghetti in just 25 minutes, and watch your kids (and partner!) devour it in no time – and ask for seconds!

While many people think of sushi when they want Japanese food, I think about the comfort food my mother made when I was a kid. Dishes like curry rice, miso soup, white stew, and spaghetti napolitan ❤️. A simple bowl of spaghetti coated with ketchup and milk, and topped with sausages, onions, bell peppers, and mushrooms. So so good!

I don’t know why I waited this long to publish this recipe since it’s been in my repertoire for years and years. Maybe it’s because it’s so simple that I never thought of posting it, but no matter the reason, I’m doing it now and I hope you enjoy this dish as much as I do!

What is Spaghetti Napolitan?

Spaghetti napolitan, also called neapolitan or naporitan, is a Japanese pasta dish that hails from the city of Yokohama (横浜), located in the Kanagawa prefecture. The dish was supposedly created after the end of World War II, by chef Shigetada Irie of the New Grand Hotel. It was a variation on the spaghetti with ketchup the US army used to eat during their occupation in Japan.

How to Make Spaghetti Napolitan

What to Serve with Spaghetti Napolitan

Make this delicious Japanese-style ketchup spaghetti in just 25 minutes, and watch your kids devour it in no time! 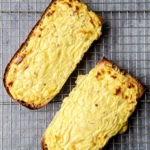 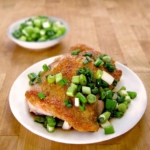 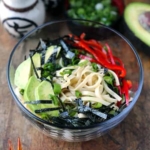