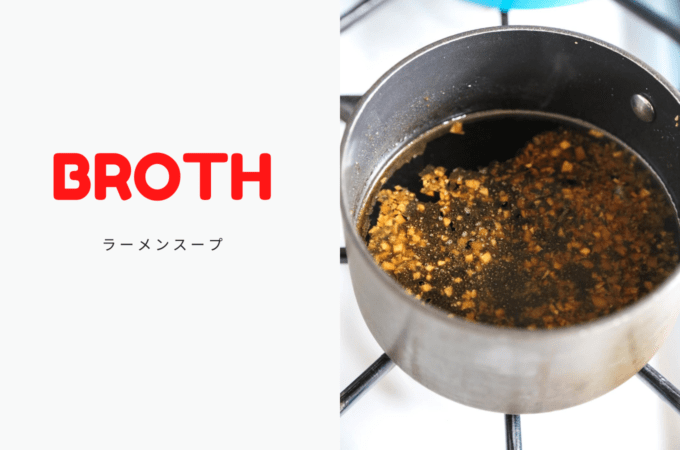 If you have ever tried making homemade ramen broth from scratch, you know it’s a complex process.

Creating the perfect ramen broth is every ramen chef’s goal. Since the broth is one of the main components of ramen, ramen chefs spend hours mixing and simmering ingredients in the hopes to produce a soup that will have plenty of depth of flavor, while still remaining mild enough so as not to overwhelm the palate after just a few sips.

There are many different ways to prepare ramen broth but the most common ingredients used are:

From there, various seasonings are added to the broth to make it distinctive, such as soy sauce, miso paste, and curry powder. The simmering process can take as long as 48 hours for broths that are more complex, such as the tonkotsu type (pork bone based).

While it would be virtually impossible to name all the ramen flavors available these days, there are five basic flavors you can easily find on ramen shop menus, or in the instant ramen aisle. 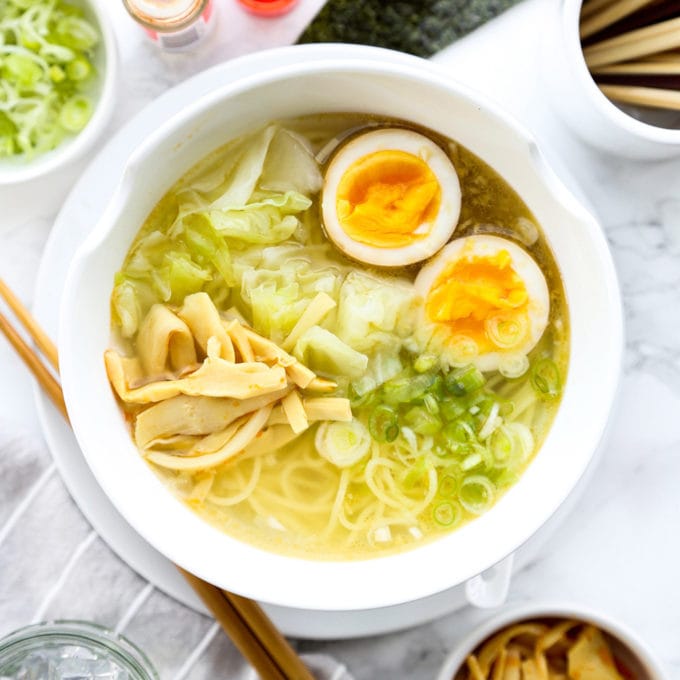 Shio ramen is the oldest flavor of ramen, dating all the way back to the early 20th century.

It’s a popular type of ramen served in Hakodate, a port city located in Hokkaido, on the northern coast of Japan.

The broth is salt based and combined with a mixture of dashi, chicken stock, and/or vegetables. Out of all the types of ramen, shio ramen has the lightest broth with its clear golden color and mild and briny flavor. It’s the most uncomplicated and straight forward bowl of ramen you can get.

If you like a clean bowl of noodle soup, this is the one for you.

Get my recipe for shio ramen here. 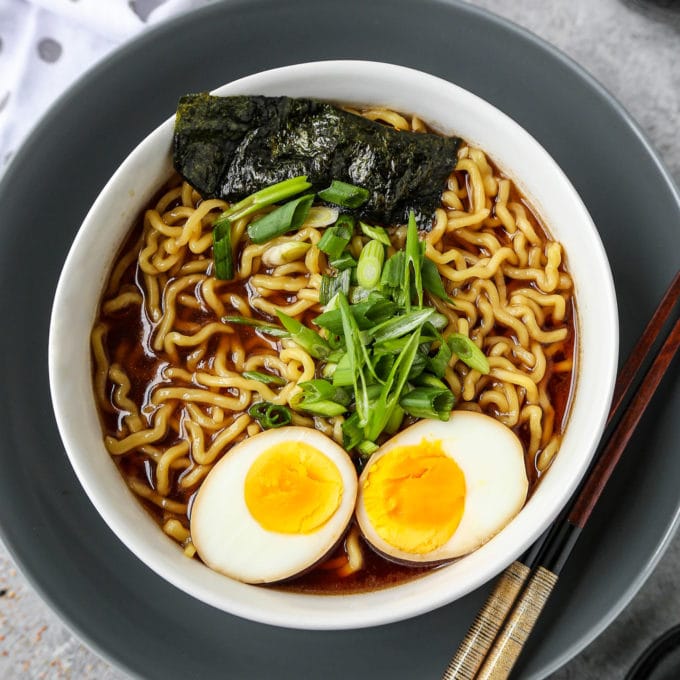 Shoyu ramen hails from the Kanto region of Japan, specifically from Yokohoma and Tokyo.

It’s the most common type of ramen sold in Tokyo with its clear brown broth made of soy sauce, chicken stock, fish or seaweed dashi, vegetables, sesame oil, and sometimes mirin.

Shoyu ramen packs a punch in the umami and salt department but still remains well balanced in flavor. You can easily sip on the broth without ever feeling like it’s too strong.

Fun fact: Japanese people from the southern region of Japan typically don’t like shoyu based ramen or udon because of the strong soy sauce taste. They prefer milder flavors such as tonkotsu broth and simple dashi based broths.

Get my recipe for shoyu ramen here.

Watch my video on How to Make Miso Ramen!

Miso ramen comes from Hokkaido, an island located in the northernmost part of Japan, where the winters can get pretty harsh.

The broth is made of miso paste and a mixture of chicken stock, pork stock, dashi, and/or vegetables. It’s the only ramen topped with a slap of butter to add richness to the soup, which is also salty, nutty, and savory.

Miso ramen is typically served with thick noodles to make the dish hearty and filling, so the body can stay warm throughout the cold snowy winters of Hokkaido.

Get my recipe for miso ramen here. 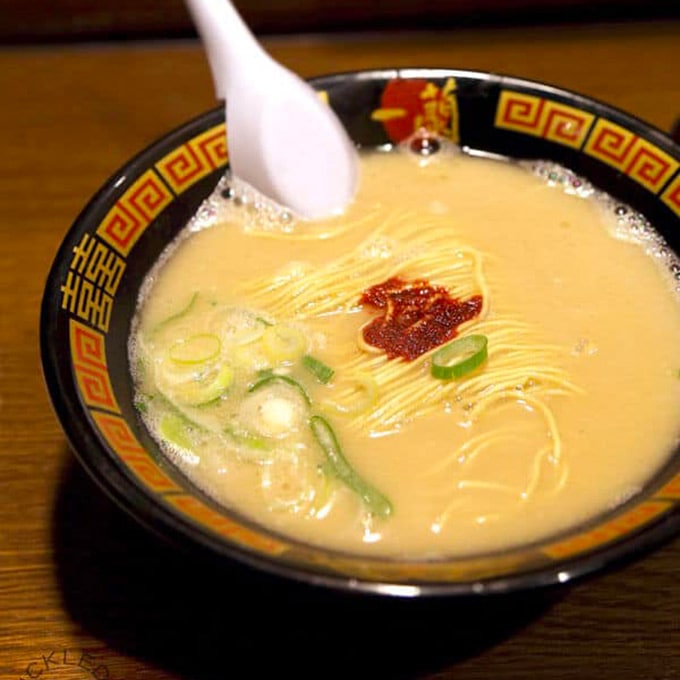 Also known as Hakata ramen, tonkotsu ramen is considered by many to be the crème de la crème of ramen .

Hailing from the Kyushu region in southern Japan, tonkotsu ramen is made with pork bones and a combination of other ingredients that have been left to simmer for up to 48 hours. The result is a broth that’s milky white, rich, mild, savory, and nutty. This particular broth has so much depth of flavor that it’s almost impossible to describe,  you just have to taste it to understand why it’s loved by so many!

Tonkotsu ramen is typically served with less noodles than your average bowl of ramen to prevent the noodles from overcooking and getting mushy as you get closer to the bottom of the bowl.

To make up for the smaller serving you can ask for more noodles when you’ve eaten most of your ramen. Say the word kae-dama, which means “extra noodles please”, and they will refill it at no additional cost.

Who would have thought that mixing curry and ramen would result in such a delicious dish!

This combination was first served in 1965, at Ajinodaiō Ramen shop in Muroran city, Hokkaido.

The broth is typically made with chicken stock and/or dashi and seasoned with curry powder, turmeric, and other classic curry spices. The soup is sweet and spicy and is served with thick noodles topped with wakame, charsiu, and beans sprouts.

Another version of curry ramen that’s been gaining popularity is a combination of shoyu or chicken ramen topped with Japanese curry. You can find this type of curry ramen all over Japan and abroad in cities such as New York, Los Angeles, and San Francisco. 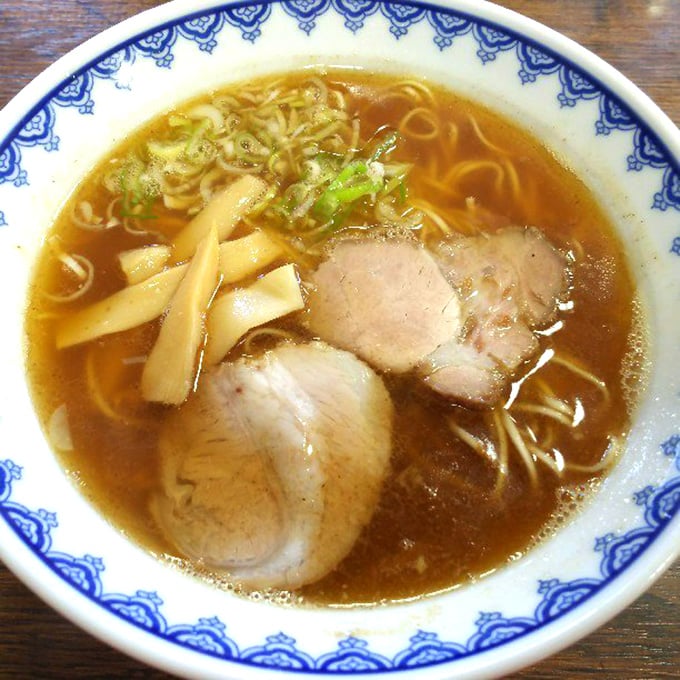 Chicken ramen, also called hida ramen or takayama ramen, comes from the mountainous area of Takayama, located in the Gifu prefecture (near Nagoya).

The clear dark broth is made with chicken bones and a mix of katsuobushi (bonito flakes), baby sardines, vegetables, and sometimes miso. It’s light, a little sweet, and full of umami. Takayama ramen is typically served with thin noodles and topped with leeks, charsiu pork, bamboo, wakame, and scallions.

Making homemade ramen broth doesn’t have to be a scary experience, there are simple ways to create tasty soups that don’t require you to be a ramen expert. That being said, don’t expect the same depth of flavor that you get from specialized ramen shops to land in your bowl. It’s more of a quick fix for a late night craving or a quick, cheap lunch.

The easiest broths to create are:

Just like with any other homemade broths, make sure to keep the leftovers refrigerated in an airtight storage container. These broths should last 4-6 days in the fridge, and up to a month frozen.