Here’s a plant based recipe that really fires on all cylinders. Velvety eggplant and meaty seitan are flash fried with garlic and tomato in a savory, peppery sauce. It’s one of the easiest vegan Asian recipes you can make in your kitchen at home – and only takes 35 minutes from start to finish!

I love making plant based recipes that don’t feel like a compromise – or like they’re missing something. And that satisfaction goes double when that recipe is praised by meat lovers.

Well, this stir fried eggplant and seitan with garlic and tomatoes really delivers on both fronts!

Because not only does this savory Japanese influenced stir fry have velvety eggplant covered in a savory, tart and peppery sauce – when I delivered some leftovers to a neighbor that prefers steak over all else, they said the seitan reminded them of bo luc lac (or Vietnamese shaking beef). That’s high praise indeed!

And I think you’ll love it too!

How to prepare eggplant for this stir fry

For this stir fried eggplant recipe, you’ll definitely want to do a little prep work on your Japanese eggplant before tossing it into the wok. But it’s easy!

This salting process is done for a couple of reasons. First, it draws out some of the eggplant’s excess moisture. But it also removes a bit of the natural bitterness.

I also find that salted, drained and dried eggplant doesn’t turn brown as quickly – as the exposure of its inner flesh to air can cause a completely harmless oxidation (kind of like a sliced apple).

Seitan is comprised of vital wheat gluten and water – and is often used as a meat substitute. This wheat-meat is completely vegan and has a mild, savory flavor similar to boiled chicken.

The texture is the real draw though. I personally find it to be pleasantly chewy without being tough – and perfectly soft without being gummy. In a word, it’s meaty.

The best part is that it is a perfect vehicle for whatever you decide to make it taste like. Not quite the blank slate that tofu is, it manages to up the ante in savory dishes and soaks in flavors very well.

These days you can find seitan sold in most grocery stores. Or, if you’re feeling ambitious, you can easily make it yourself at home. Check out my post on how to make seitan with this easy step-by-step guide.

Not a fan of seitan? No problem!

Just keep in mind that, even if you’re not using wheat based seitan in this stir fried eggplant recipe, that doesn’t immediately make it gluten free. There is also wheat in soy sauce.

So for a gluten free stir fry, you’d want to substitute the seitan for a wheat-free protein – and use tamari or liquid aminos instead of the soy sauce.

How to make eggplant stir fry

FRIDGE: transfer the stir fry to an airtight storage container and refrigerate for up to 2 days. Reheat in the microwave for 1 to 2 minutes.

FREEZER: Unfortunately, this stir fry cannot be frozen due to the texture of the eggplant becoming moussy and unpleasant.

What to serve with stir fried eggplant

My favorite accompaniment to any Asian stir fry is a bowl of perfectly steamed Japanese rice. For a step-by-step tutorial on how to make Japanese rice on the stovetop or in a rice cooker, check out my post here.

And on the same track, you could whip up an easy Japanese fried rice to serve on the side.

Or, if noodles are more your thing, you could enjoy this stir fry alongside a cooling zaru soba – or a buttery yaki udon fresh out of the skillet.

What about you? Are you more into noodles or rice when eating stir fry? Let me know your favorites in the comments section below!

Other delicious and easy eggplant recipes

Hey fans of eggplant… I’m of the mind that you can never have too many Asian eggplant recipes in your back pocket!

Here are a few reader favorites: 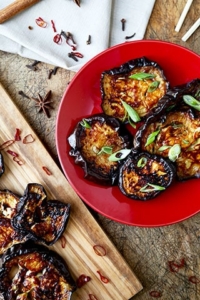 Did you like this stir fried eggplant and seitan with garlic and tomato recipe? Are there changes you made that you would like to share? Share your tips and recommendations in the comments section below!

Stir fried eggplant and seitan with garlic and tomato

Tender eggplant and meaty seitan are flash fried with garlic and tomato in a savory, peppery sauce.

Refrigerate the leftovers in an airtight storage container for up to 2 days. 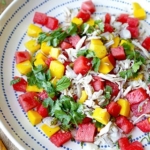 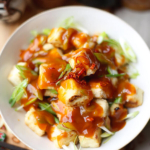 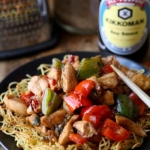 Kung Pao Chicken – Here’s How To Make It 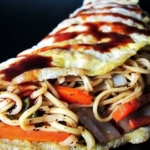