This wonton soup is quick and easy to make, brimming with pillowy dumplings stuffed with cabbage and carrots that are dancing in a nutty and savory broth. It’s the best!

Wonton soup is one those dishes I could eat every day.

I love its simplicity and the delicate flavors of the broth and the dumplings. I find that the less it’s fussed with, the better it is. It never disappoints!

I’ve been meaning to create a recipe for wonton soup for quite some time but wasn’t sure how to go about it without the use of ground pork (I stopped eating meat three years ago for both health and ethical reasons). Then I discovered a place in Brooklyn that served the best vegetable wonton soup!

It was one of those aha moments: “Hey, guess what! I can make really amazing wonton soup with just veggies. Wonderful!”

So today I would like to introduce to you my version of wonton soup and I hope you love it as much as I do. Both Ben and I are gaga for it! So much so that I always make extra dumplings to freeze so I can make more soup as soon as we run out.

What is Wonton Soup?

Wonton soup is a simple soup dish with a clear broth, usually made with chicken or shrimp, that is served with wonton dumplings (also spelled wantan or wuntun) filled with a mixture of vegetables, ginger, minced pork, and shrimp.

There are many different types of wonton soups in China but the one described above is the quintessential one we have come to associate it with, here in the Western world.

How to Make Wonton Soup

Whisk 1 or 2 eggs and slowly add them to the soup stirring constantly in a zigzag motion with a fork or chopsticks. Do this at the last stage, once the wontons are cooked.

Can I Freeze Wonton Soup?

You can freeze the uncooked wonton and the broth so long as they are kept separate. To do so, save the broth in an airtight storage container and put it in the freezer.

For the wontons, place them on a plate leaving a little space between each of them and cover with plastic wrap. Refrigerate for 1-2 hours until the wontons are cold, transfer them to an airtight storage bag or container, and put them in the freezer.

To cook, you don’t need to let them thaw, just add them to a pot along with the frozen broth and turn the heat to medium. The soup is ready to eat once the broth is bubbling and hot!

Just make sure that no eggs are used in the wonton wrappers by looking at the ingredients list on the package.

Most wonton soups aren’t vegan though since the filling usually contains a mixture of pork and shrimp.

What to Serve with Wonton Soup

This is a light and fairly mild soup that pairs well with just about anything. The only thing I personally don’t like to serve this soup with is with another dish containing noodles (since the wonton wrappers are essentially noodles). Too many carbs in one sitting leaves me feeling a little too bloated!

Here are my favorite dishes to pair this delicious wonton soup with:

This wonton soup is quick and easy to make, brimming with pillowy dumplings stuffed with cabbage and carrots that are dancing in a nutty and savory broth.

The soup cannot be saved for later once it’s cooked since the wontons will lose their shape and get soggy.

When you are ready to make more soup, place the cold or frozen broth and frozen wontons in a pot and reheat. Bring the soup to a boil and turn the heat off. Enjoy! 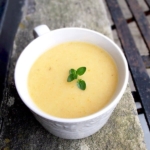