This is a nutty and savory vegan ramen recipe that’s packed with chopped onions and ginger. The simple tahini and vegan dashi based broth gives the dish a silky element and delicate taste. 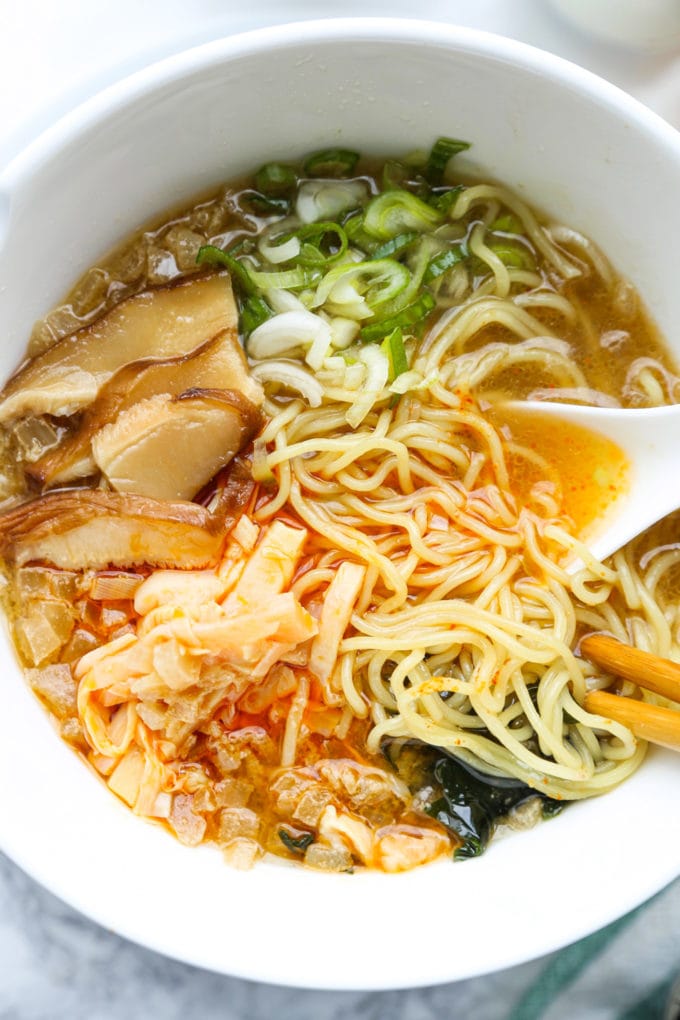 One of the things I love about ramen is the variety of toppings, noodles, and soups it offers. There are so many different types to choose from, it’s virtually impossible to get bored of this iconic Japanese dish!

I grew up eating tonkotsu ramen (pork based broth) because of my mother who is from Kyushu – the birthplace of tonkotsu ramen. I never got tired of slurping egg noodles coated in a milky white pork broth, topped with charsiu pork, chopped scallions, and a ramen egg.

If you are from Kyushu, such as my whole Japanese family, chances are you only eat tonkotsu ramen and consider other ramen flavors such as shoyu (soy sauce), less complex and not particularly exciting.

I, on the other hand, enjoy the whole flavor spectrum that ramen has to offer, probably because I grew up in a small town in Quebec, and had to make up for lost time by trying everything on the menu. But since I no longer eat meat I’ve had to say goodbye to my dearly beloved tonkotsu.

Luckily, I’ve tasted some pretty spectacular vegan ramens during the past couple of years so I thought it would be fun to try to come up with my own recipe.

While many vegan ramen versions use miso paste as a base, I’ve decided to try something different for today’s noodle soup. I’m skipping miso paste altogether and using a mix of tahini, vegan dashi, soy sauce, mirin, and sesame oil,  to create the broth. The result is a briny,savory, nutty, and mildly sweet broth that’s easy to sip on and never gets overwhelming.

Let me show you how to make it! 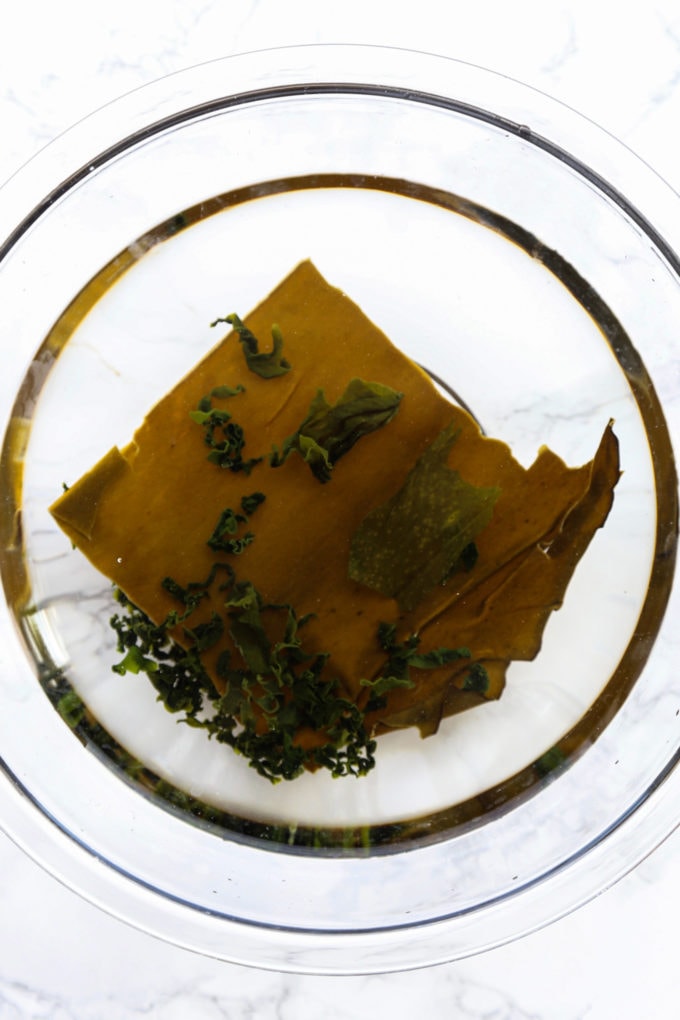 Technically, you can use whatever you want as a topping. Hey, it’s your own bowl of noodles after all so don’t be afraid to experiment with your favorite ingredients! However, if you would like to stick to a more traditional bowl of ramen, here are some of the most popular vegan choices: 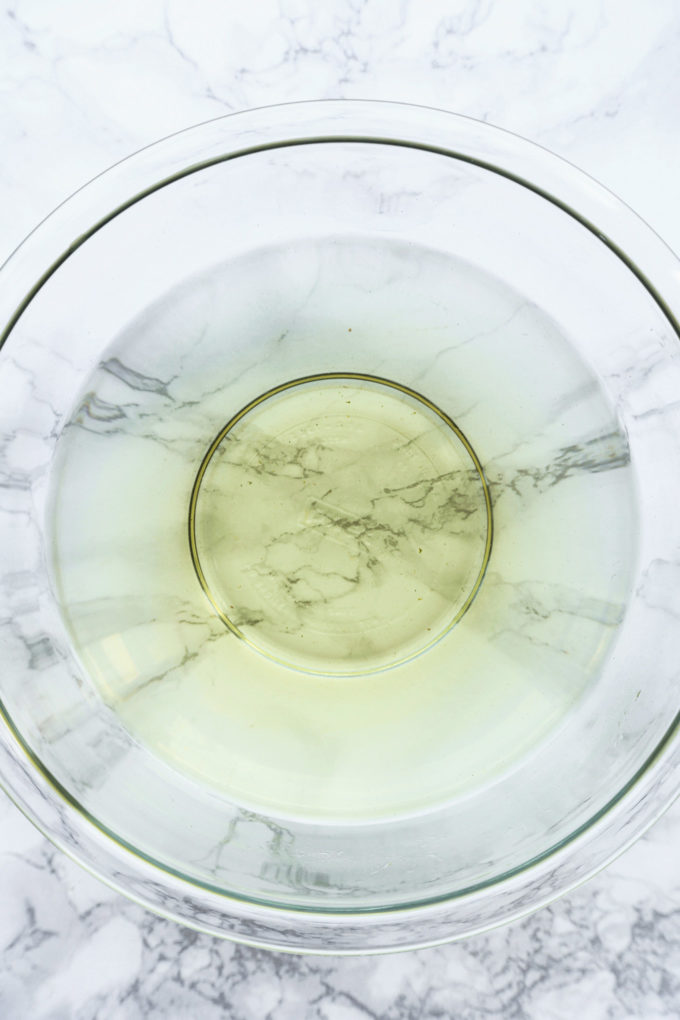 How to Make Vegan Ramen

You can store the broth in the fridge in an airtight storage container and it will keep for up to 3 days.

You can also freeze the broth, also in an airtight storage container, to keep for up to 3 months. 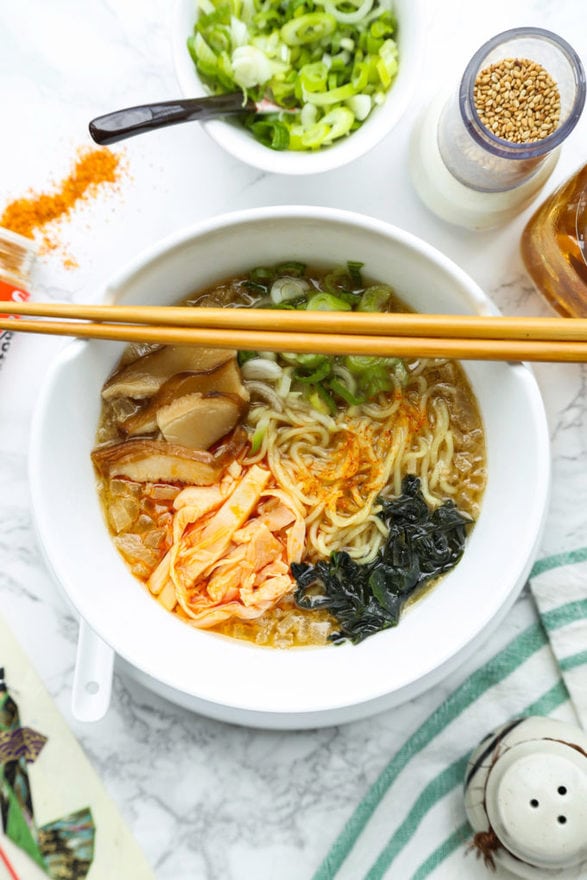 What to Serve with Vegan Ramen

Picks some simple vegan side dishes, nothing too heavy since ramen is already quite filling! Some of my favorite Asian sides to pair with ramen are: 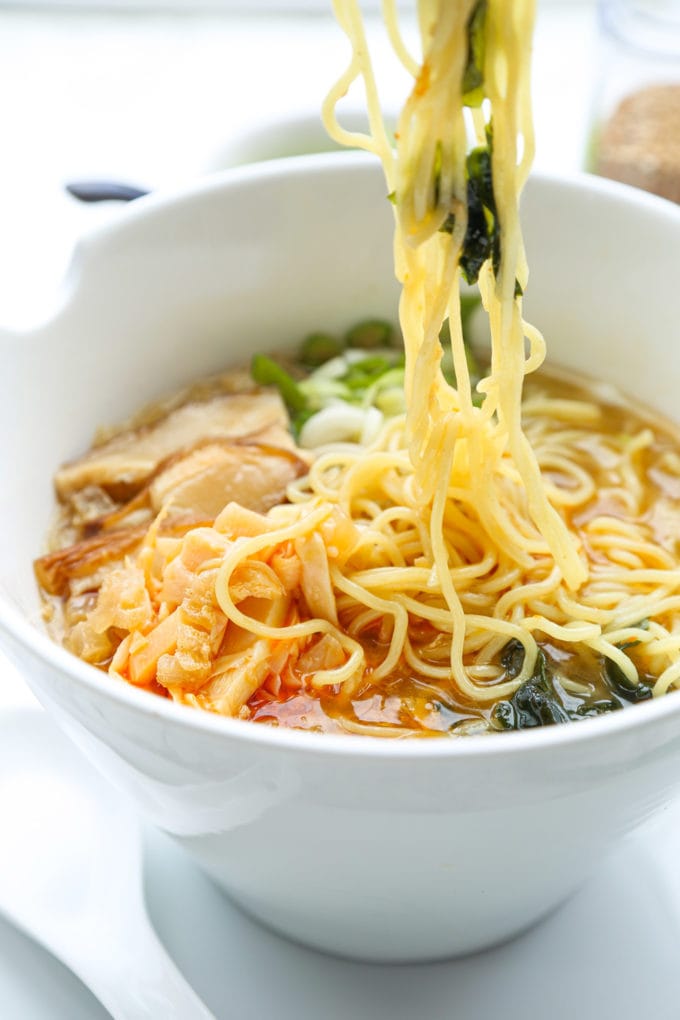 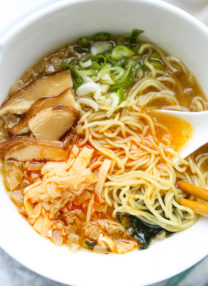 This is a nutty and savory vegan ramen recipe that’s packed with chopped onions and ginger. The simple tahini and vegan dashi based broth gives the dish a silky element and delicate taste.

Toppings of your choice:

Store in the fridge in an airtight storage container for up to 3 days.

To freeze the broth:

Store the broth in an airtight storage container and freeze for up to 3 months.

Make this recipe gluten-free by: