Donburi is one of those easy and comforting Japanese meals everyone seems to love. The more common types of donburi are made using chicken or beef, but did you know that it can also be made with fish? This is an easy salmon donburi dressed in a homemade teriyaki sauce that’s garlicky, sweet, and savory. Ready in 20 minutes from start to finish.

Donburi (どんぶり), or don, which simply means bowl, is a Japanese dish consisting of rice topped with a variety of meats, seafood, or vegetables. Some donburi ingredients are simmered in a sauce before being served over rice, while others are presented raw, just like sashimi.

The dish is typically served in a donburi bowl, which is larger than a traditional rice bowl, but smaller than the ramen bowls we are used to seeing here in the US. A donburi bowl can also come with a lid so the dish can finish steaming in the bowl right before being served.

Some of the more popular donburi dishes are:

Salmon fillet: You will need between 8 t0 10 ounces of skinless, boneless salmon fillets. Look for the blue MSC label to ensure that the fish you are buying can be traced back to an MSC certified fishery (sustainable fishing).
Salt: Just a pinch to season and tenderize the fish.
Flour: Use all-purpose flour to give the fish a light and crispy texture.
Oil: You can use any type of neutral oil, such as grapeseed oil, vegetable oil, or safflower oil.
Teriyaki sauce: You can use store bought teriyaki sauce but I personally prefer the homemade version. My recipe for teriyaki sauce is less sweet, more garlicky and savory.
Cooked Japanese rice: Preferably the short grain type. If this is the first time you are making Japanese rice, watch my tutorial here.
Baby spinach: Baby spinach has a grassy flavor that pairs really well with the sweetness of garlic.
Scallions: Chopped scallions add a nice crunch and a refreshing taste to the donburi bowl.
Sesame seeds: I like sprinkling a few sesame seeds to finish the dish to make it look even more aesthetically pleasing.
Ichimi togarashi (optional): If you like a little heat with your meal, adding a dash of ichimi togarashi will hit the spot.

Not a big fan of salmon?

Not a big deal. Use another type of firm fish such as arctic char or snapper, or skip the fish and use chicken instead. Or you can make this recipe vegan by using tofu or tempeh.

How To Make Salmon Teriyaki Donburi

How to Store Donburi

If you end up with leftovers, the best way to store donburi is to keep the rice and the fish in separate airtight storage containers.

The reason is because fish overcooks quickly so it’s best to microwave the rice on its own first.
When you feel that the rice is hot enough to eat, add the fish on top and microwave for an additional 40-50 seconds.

This way the texture of the fish should still be moist and tender.

What to Serve with Salmon Teriyaki Donburi

Donburi is typically served as a main dish and because it’s quite filling, goes best with small sides that are on the lighter side. Think salads, soups, and other sides that are heavy on vegetables.

Some of my favorites are:

This is an easy salmon donburi dressed in a homemade teriyaki sauce that’s garlicky, sweet, and savory. Ready in 20 minutes from start to finish.

Keep the rice and the fish in separate airtight storage containers. Reheat the rice first until it’s hot enough to eat, then add the fish on top and microwave for an additional 40-50 seconds.

This ensures that the texture of the fish remains moist and tender. 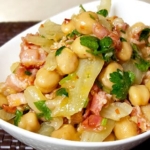 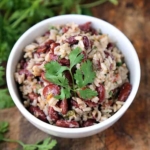 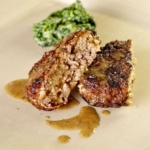 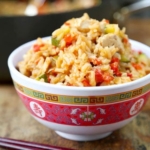