Learn how to make light, airy, and perfectly crunchy shrimp tempura in your own kitchen with this easy to follow tutorial.

Tempura is one of Japan’s most iconic dishes.

With its light and crispy batter it’s no wonder why it’s become one of Japan’s favorite food exports, next to sushi and ramen.

Making tempura is an art in Japan – specialized shops called tempura-ya offer the thinnest, crispiest, and lightest batter, that’s virtually grease-free. Some chefs like to use carbonated water instead of regular water, for extra airiness. The tempura is served with homemade seasoned salt instead of the ubiquitous tempura dipping sauce. It’s all about keeping the batter as crispy as possible.

The whole experience is something unique that I recommend you try if you ever find yourself in Japan. It’s tempura like you’ve never tasted before!

The shrimp tempura recipe I have for you today isn’t going to give you tempura-ya grade food, but is one I enjoy making nonetheless. It hits the spot whenever I crave tempura and is less doughy and greasy than what I usually get here in the US. Enjoy!

Tempura (天ぷら) is a traditional Japanese dish consisting of vegetables and seafood that have been dipped in a light batter and deep fried until crispy.

What’s interesting to know is that while tempura is considered to be a Japanese dish, its origin are rooted in Portugal. The art of deep frying was introduced to Japan in the 1600s by Portuguese traders and eventually became a common vegetarian dish found in Buddhist temples.

It was also a popular street food sold by pushcarts across old Tokyo (called Edo) and has since remained a favorite among Japanese people.

There are two traditional way to serve shrimp tempura – with tempura dipping sauce or dipping salts, which are finely ground salt grains seasoned with ingredients such as matcha, ground sesame seeds, or pulverized dried shrimp.

How to Make Tempura Batter

The secret to making deliciously light and crispy tempura lies in how you make and fry the batter. Timing, oil temperature, batter temperature and texture, and organization, and are all crucial parts to making good shrimp tempura. Let’s go over each step so you can learn to make delicious tempura every single time!

Organization: From peeling shrimp to dipping and deep frying them, keeping your work station clean and organized is a must. There are quite a few steps to making shrimp tempura so by keeping your cornstarch, wet and dry ingredients, shrimp, and deep frying tools organized, you will be able to move swiftly from one step to another, without feeling overwhelmed or frustrated.

Timing: Just like organization is crucial to making the cooking process successful, timing is crucial to the success of the batter. You want to make sure that the batter is ice cold when it’s time to dip the shrimp and add them to the oil. Ice cold batter prevents the batter from absorbing a lot of oil, so the tempura stays light and crispy.

Oil temperature: 360ºF is the ideal temperature to make shrimp tempura. It’s easy to keep an eye on the temperature with a kitchen thermometer but there is another easy way to test the oil if you don’t have one. Drop a few of globs of batter into the oil and see what happens – if it sizzles right away, the oil is too hot. If it sinks to the bottom, the oil is not hot enough. Keep testing until the batter sinks halfway down and pops back up. When it does that you can start deep frying.

Batter temperature: The batter must be ice cold right before it’s being used. The best way to achieve this is to wait to make the batter until you are almost ready to deep fry. Keep all of your ingredients in an area that’s closest to where you will be frying and make your batter there. Keep water in a bowl with a few ice cubes and discard the ice cube right before using it.

Batter texture: The key to making good tempura batter is by controlling the gluten in your batter. You want to try to activate it as little as possible to keep the texture of the tempura light and crispy. When it’s time to add the flour to the ice cold water and egg mixture, dump it in in one shot and leave it. Don’t mix it, this is very important! Instead, grab your chopsticks and poke the flour to combine it with the wet mixture. Do this for 20-30 seconds at most. It’s totally fine if you see lumps – that’s what gives tempura its uneven texture and irresistible crunchy bits.

Dip lightly: Finally, dip the shrimp lightly and try not to move it around too much in the batter (remember – you don’t want to activate thee gluten!).

How to Make Shrimp Tempura

If you are in the mood to go all Japanese for your tempura dinner, here are popular traditional sides to serve it with:

Click here to watch my easy tutorial on how to make perfect Japanese rice every single time, without fail.

Learn how to make light, airy, and perfectly crunchy shrimp tempura in your own kitchen with this easy to follow tutorial.

Shrimp tempura taste best when consumed immediately. I don’t recommend saving the leftovers for later but if you would like to, keep the shrimp refrigerated in an airtight storage container. They will keep for 1 day. 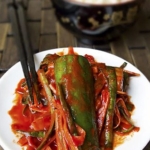 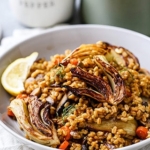