Making this mochi recipe at home is so easy that you won’t believe it until you make it! All you need is an immersion blender and a microwave to make these chewy Japanese rice cakes.

I’m so happy to share this recipe with you today because I’m a huge fan of mochi!

Never in my life did I imagine I would be able to make mochi using a microwave. The only other time I saw it made from scratch was in Japan and let me tell you – it was not an easy process!

It was New Year’s Day and my whole family gathered at my uncle Nori and aunt Fumiko’s place for mochitsuki ((餅つき), which is a traditional mochi making ceremony to celebrate the arrival of the new year. The men were outside pounding freshly cooked mochigome (short grain sweet rice) using a large mortar called usu (碓), and a wooden mallet called  kine (杵), while the women stayed indoors, shaping the mochi into perfectly uniform balls

It was such a fun and interesting process watching one person pound the rice while the other was in charge of turning it. All the men took a turn pounding and turning the rice until it slowly turned into a chewy dough.

We made so much mochi that day that the entire living room floor, which was covered with bed sheets, was filled with rice cakes! My aunt packed a few mochis for everyone to take home that day, which my mother used to make ozoni the next.

It was an experience I’ll never forget because it brought me so close to my relatives and my Japanese roots.

Mochi is a Japanese rice cake made of Japonica glutinous rice, called mochigome (糯米), that’s been cooked and pounded into a sticky paste. Once pounded, the rice is molded into a ball, rectangle, or other shape. The texture is chewy and the flavor slightly sweet.

It can be served as a traditional Japanese confection called wagashi, stuffed with sweet red bean paste (called daifuku), with kinako (sweet soybean flour), stuffed with ice cream, added to soups, or brushed with a little soy sauce, toasted over a grill, and wrapped in seaweed (called isobemaki).

In the springtime, mochi is dyed pink to represent the arrival of cherry blossoms, and is stuffed with anko (sweet red bean paste). This confection is called sakura mochi (sakura is the Japanese word for cherry blossom).

How to Pronounce Mochi

Mochigome is very easy to find.

You can find it in Japanese grocery stores and other Asian supermarkets. Just look for the words short grain sweet rice on the package.

You can also order mochigome on Amazon or other online supermarkets selling Asian food.

Where to Buy Mochi

If you don’t feel like making mochi from scratch but crave the chewiness (I’ve been there many times!), you can buy mochi in most Asian supermarkets and Japanese grocery stores.

You can also purchase different types of mochi such as rice cakes, daifuku, or mochi ice cream, on Amazon.

Tools Needed to Make Mochi in a Microwave

How to Make Mochi

How Long Does Mochi Last?

Mochi tastes best when it’s fresh because the texture is soft and chewy, which is what makes mochi so yummy and addictive. It shouldn’t be left at room temperature for more than one day since rice develops mold quickly and easily.

Can I refrigerate it?

Yes but I don’t recommend it. That’s because the texture will become hard and grainy and microwaving it would make it too soft. But if you do decide to refrigerate it, let the mochi sit on the counter until it reaches room temperature before eating so the texture gets a little softer.

Mochi keeps extremely well frozen! Wrap each mochi ball in plastic wrap and place them in an airtight storage container before freezing. When you want to use them, microwave for 45 seconds or a little longer and unwrap after. If you want to use mochi in a soup,  simply add the frozen ball in the soup since it doesn’t need to thaw.

How to Store Mochi

Mochi is best when it’s moist and chewy so always keep the rice cakes in an airtight storage container with a lid, or Ziploc bag, sealed. Or if you are freezing them, wrapped individually in plastic wrap and placed in a Ziploc bag, sealed.

How to Serve Mochi

There are so many different ways you can serve mochi – as a snack, dessert, appetizer, or side dish. Here are some of the more popular ways to serve mochi:

How to Make Mochi in a Microwave

All you need is an immersion blender and a microwave to make these chewy Japanese mochi cakes!

How to serve mochi:

HOW TO STORE MOCHI:

Mochi is best when it’s moist and chewy so always keep the rice cakes in an airtight storage container with a lid, or Ziploc bag, sealed.

FREEZING: Wrap the mochi balls individually in plastic wrap and placed them a Ziploc bag, sealed. They will keep for up to a month. 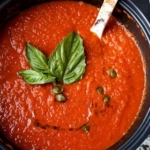 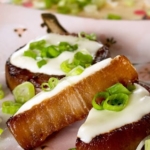 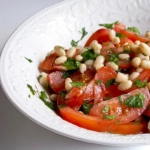