If rice is the backbone of the Thai diet, then Fish Sauce is the cornerstone of the Thai palate – and one cooking staple which should definitely be in your pantry’s arsenal. 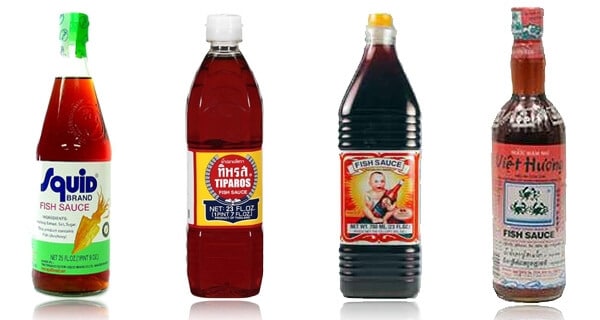 What is Fish Sauce?

Fish sauce (Nam Pla, น้ําปลา ) is a condiment made of fermented anchovies, salt and water – and used both as a cooking ingredient and dipping sauce throughout much of Southeast Asia.

This light whiskey colored condiment is basically the salt shaker of countries like Thailand, Vietnam and Laos – lending a rich, savory, almost caramelized brininess to everything it is used in as an ingredient.

The fermentation process is spawned by bacteria that breaks down the fish (which has been stored in vats with salt) and ranges anywhere from a few months to years. And the resulting liquid is fish sauce.

Now, people have been cooking with fish sauce for eons. The ancient Romans also made a funky liquid condiment out of fermented fish called garum that was used both in compound sauces and in place of salt. It is said that this ancient, heady brew had many similarities to the Southeast Asian condiment we know and love today.

The inclusion of even a small amount of fish sauce in a recipe can introduce deep levels of moreish, savory umami.

But proceed with caution if you’re not super familiar with this ingredient. A little goes a long way.

And much like salt and pepper shakers in the Western food lexicon, it is common to see fish sauce with sliced bird’s-eye-chilis (prik nam pla) on the table during many Thai meals – which is there to add a little heat and rich sodium to your food if you choose.

However, don’t think you can just use table salt in your papaya salad, and cut out the fish sauce. No way. The salty flavor is only one of the many nuanced elements and tasting notes fish sauce brings to the kitchen.

Now, I would always advocate using fish sauce in recipes that call for it. However I realize that may not always be pragmatic or possible.

While none of these are perfect substitutes, here are a couple of alternatives if your red coconut curry soup is ready to serve, but you’re fresh out of fish sauce:

Many chefs mention Worcestershire sauce as being a good substitute for fish sauce – but I don’t agree. I find it far too tangy to stand in for the original. But, hey… to each their own.

Where to buy fish sauce

You should have no trouble tracking down fish sauce at an Asian market – and you’ll most likely be spoiled for choice. However, many Western grocery stores now stock fish sauce in the Asian ingredients aisle – usually near the soy sauce and sriracha.

And if all else fails, you can always pick up fish sauce on Amazon.

How to store fish sauce

Fish sauce can be stored in a cool, dark place  – such as inside a kitchen cabinet away from a heat source. Since the salt content is so high, refrigeration is not required.

And it lasts a long time even after being opened. Now, I use fish sauce a lot – so I’ve never had a bottle for more than a couple months before needing to replace it because it was, you know… empty. However, stored properly, it can last for 2-3 years.

Best practice: just read and follow the use by date – and as always, exercise your best judgement.

One note: salt crystals sometimes form inside bottles of fish sauce. This is naturally occurring – and won’t alter the quality of the sauce.

Taste is completely subjective, but I’d say some of the best mass produced Thai fish sauces are made by Tiparos, Golden Boy and Squid.

But if you are looking for the overall best tasting fish sauce, I’d say that the Vietnamese-made Red Boat is the clear leader of the pack. It’s the fish sauce I turn to in my own kitchen most frequently.