Savory and a little sweet, this Foil Baked Enoki Mushrooms Recipe is ready in 20 minutes! Plus, learn all about Japanese enoki mushrooms – エノキタケ. 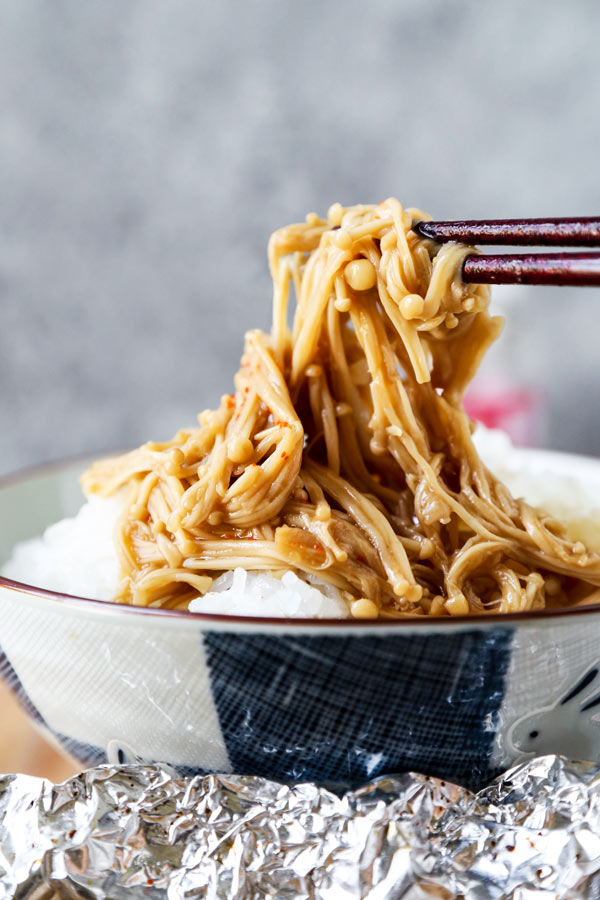 I’ll never forget the look on Ben’s face the first time he came to Japan with me. He was just so excited.

His eyes were the size of silver dollars, recording each new experience with the unabashed wonder you normally see in little kids at an amusement park. Needless to say, I don’t think he slept much in the first three days of that maiden voyage.

That wonder and excitement was infectious – and I found myself getting an unusual kick out of things I had done a trillion times before, just because he was so enthusiastic and delighted.

Thankfully, that enthusiasm carried over into food.

One evening we were sitting at a Japanese BBQ spot, drinking beer after ordering almost half the menu. A waitress arrived, flipped on the in-table barbecue and placed a foil packet with crimped edges in the middle.

Ben was immediately curious. “What’s that?”

“I think it’s the foil baked mushrooms,” I said.

Well, it turns out that foil packet was the butter and soy sauce laden Japanese mushroom medley we had ordered. It also turns out that, of all the new food Ben experienced on his first trip to Japan, he still holds that dish in high regard.

In fact, he was the one that suggested I share my vegan version of that foil baked enoki mushrooms recipe with you! 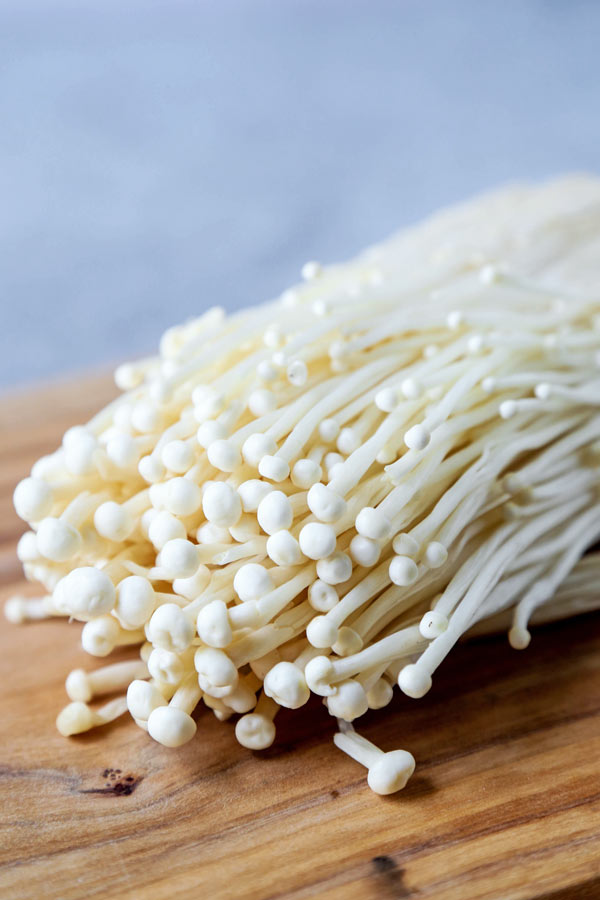 What are enoki mushrooms?

Enoki – エノキ – mushrooms are long, thin white Japanese mushrooms with very slim stems and small caps. They grow in clusters and, once cooked, have a mild flavor that usually does a nice job of melding with the nuances of whatever spice combinations you’re preparing them with.

Enoki mushrooms are featured heavily in salads, stir fries, hot-pot, ramen and yakitori dishes like enoki bacon. And these skinny mushrooms are absolutely amazing in a mushroom miso soup!

Once cooked, the texture takes on a pliant firmness that almost borders on a mild crunch. 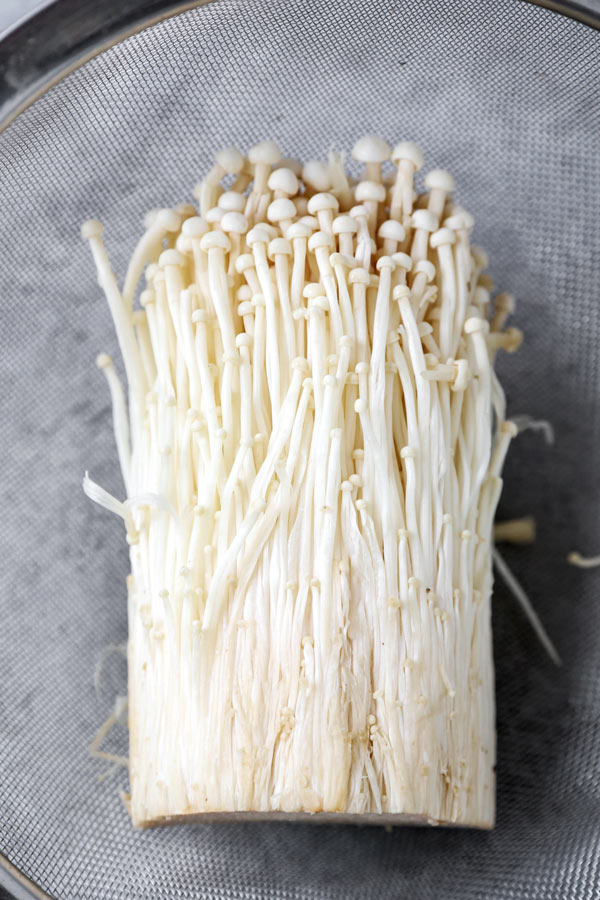 Where can I buy the Japanese ingredients I’ll need for this recipe?

Luckily, it’s getting easier and easier to find Japanese ingredients in Western grocery stores. However, if they aren’t available in your area, they’re easy to find on Amazon: 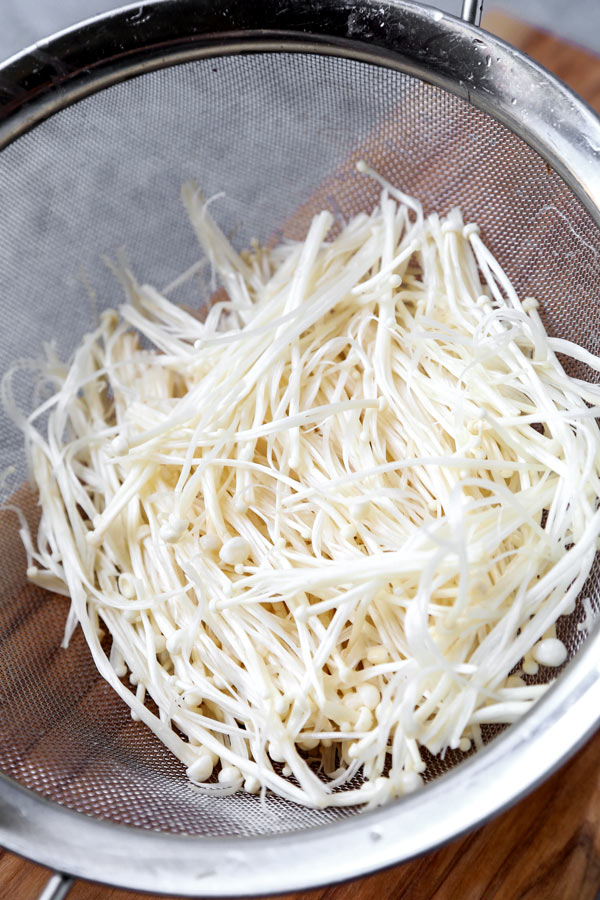 How to Cook Enoki Mushrooms in Foil

Aside from making hot-pot (where you just dump your mushrooms into the boiling broth), baking in foil is one of the easiest methods for cooking enoki mushrooms.

One thing I’m sure of: you’re gonna love the sweet and earthy umami flavor. It happens to punch way above its weight class, considering the humble and short ingredients list!

With the earthy sweetness of white miso paste, an umami saltiness from soy sauce – and a dry bite brought on by sake – there is flavor to spare! In fact, both Ben and I (and my Japanese mother) prefer this flavor combination. It’s aggressively seasoned – yet lets the delicate flavors of the enoki mushrooms shine through. 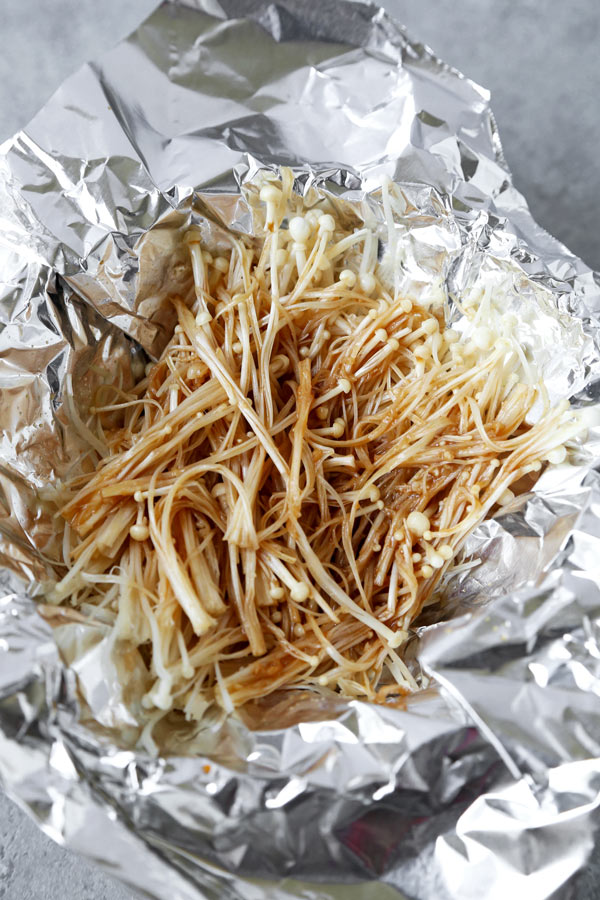 Aside from being a fantastic source of protein, enokis are low in calories and are virtually fat free.

But they’re also a wonderful source of niacin and other B vitamins.

Enokis, like most mushrooms, are also known to contain an amino acid called ergothioneine which is an antioxidant that can fight a lot of cell stressors our bodies are constantly combating.

And if you’re looking to introduce a decent bit of dietary fiber into your meal plan, enoki mushrooms are right on the money there as well! You see, they contain beta-glucan – which is a soluble fiber which some use to fight high cholesterol.

These Japanese mushrooms are just full of good stuff our bodies need! 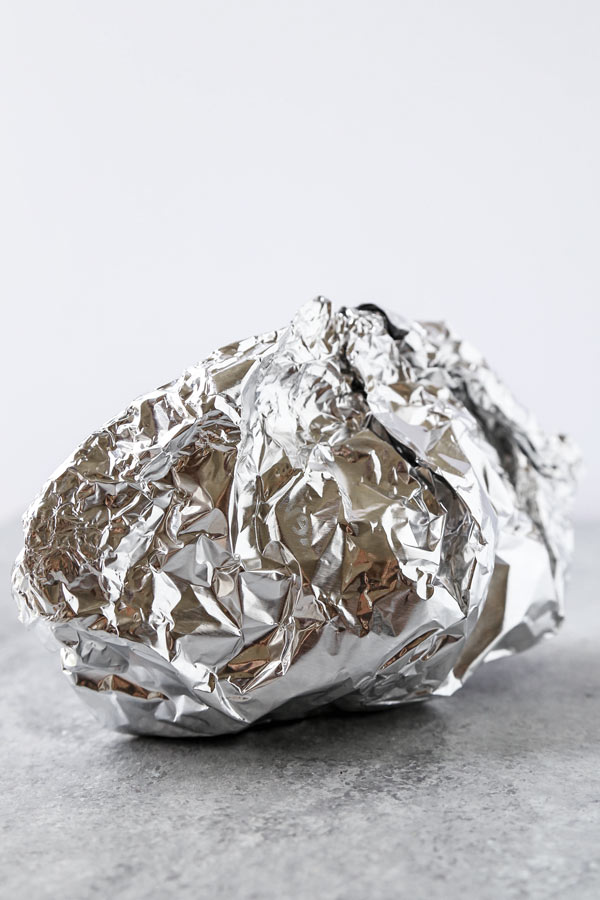 How to tell when enoki mushrooms are bad

Raw enoki mushrooms in their original packaging are likely to be good for at least a week as long as they are kept in the refrigerator.

That said, it does depend on how fresh they were when you first bought them. I’ve had enokis, that had accidentally been buried in an overfilled veggie crisper, that were still good after two weeks.

However, your senses of sight, smell and touch are going to be the ultimate deciding factor when determining if your enoki mushrooms should be cooked in foil – or tossed in the trash.

In my home cooking career, I’ve found that, when in doubt, it’s best to follow my gut on most things food related.

If you’re on the fence, better safe than sorry. 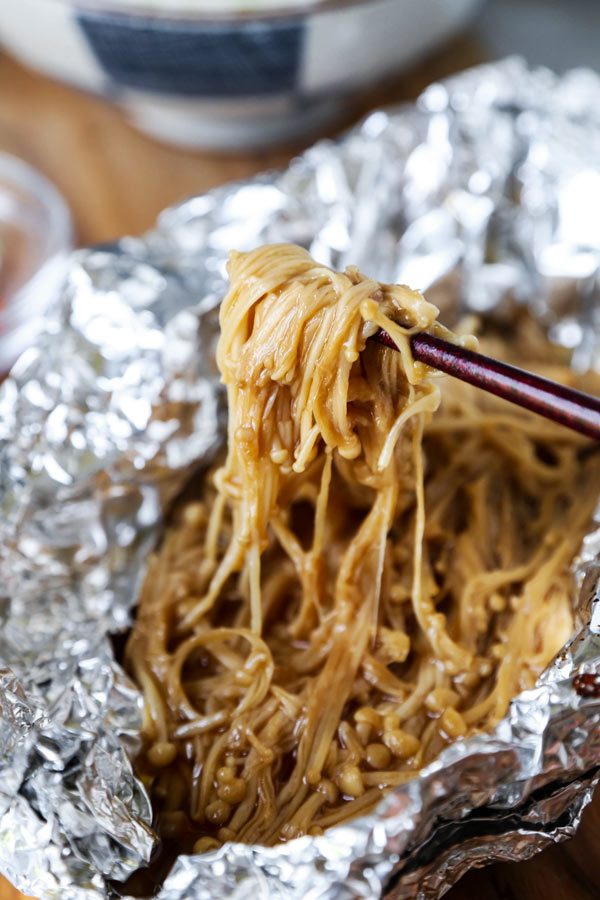 A Japanese recipe anyone will enjoy

This foil baked enoki mushroom recipe is a great introductory recipe to prepare for someone who might be on the fence when it comes to Japanese cuisine or mushrooms in general.

The sweet, savory, earthy and umami flavor profile is a real winner. And mushrooms have a ton of things our bodies need to function at their peak.

However, aside from all that, what really grabs me about this yummy vegan mushroom recipe is that it still makes my hubby’s eyes light up like a little kid at an arcade. As soon as I put the foil packet on the table, I can tell he’s transported to his wondrous first trip to the land of the rising sun – and all the delicious magic that trip introduced him to.

What about you? What’s a recipe you make that reminds you of the first time you, or someone you love, ate it? I’d love to hear about it in the comments!

What to serve with these Japanese Baked Enoki Mushrooms 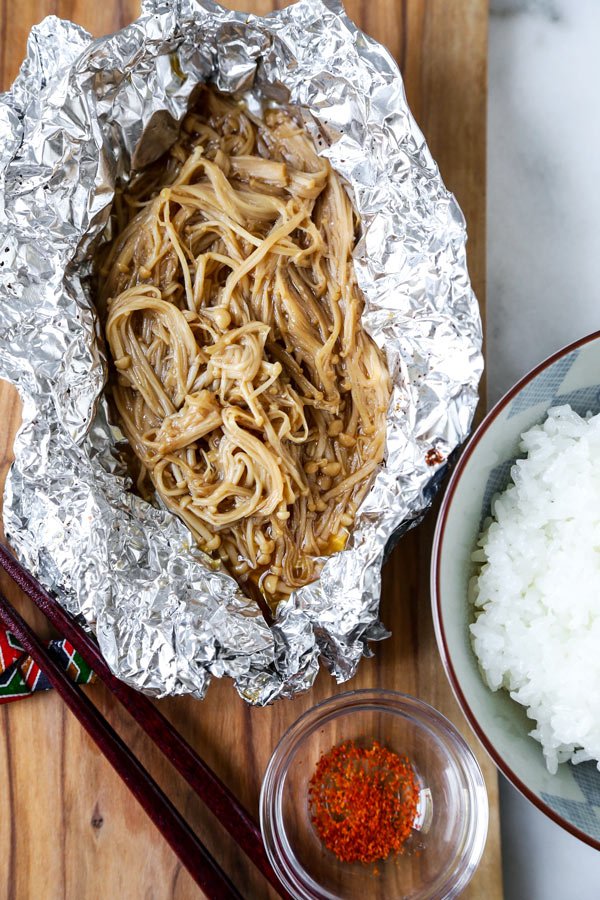 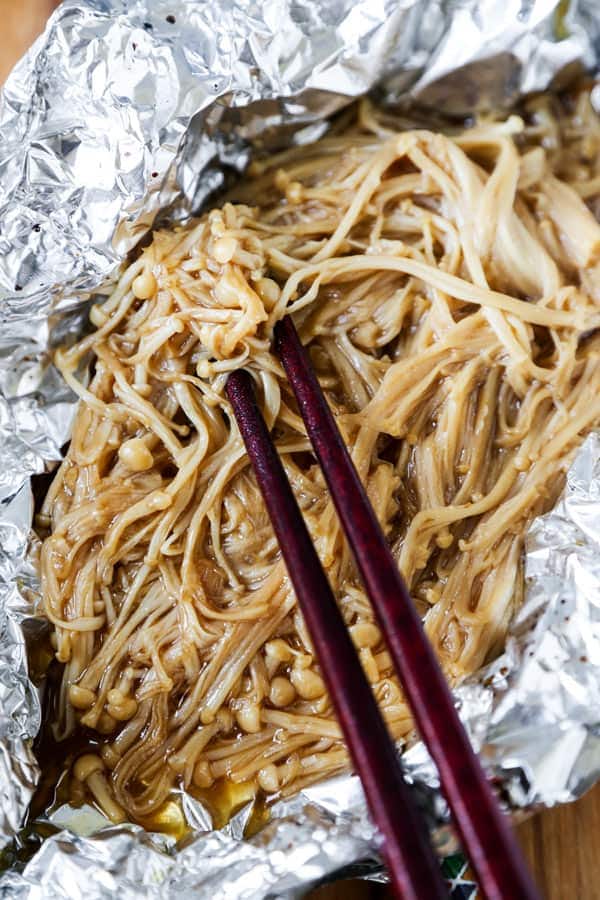 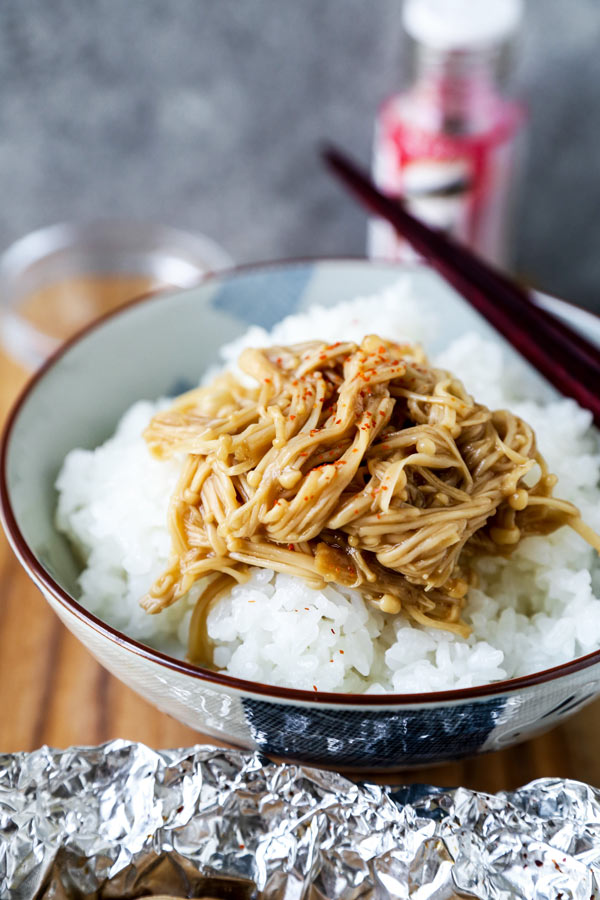 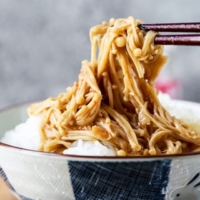 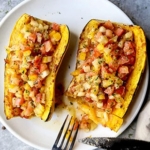 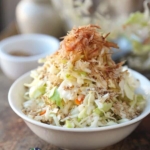